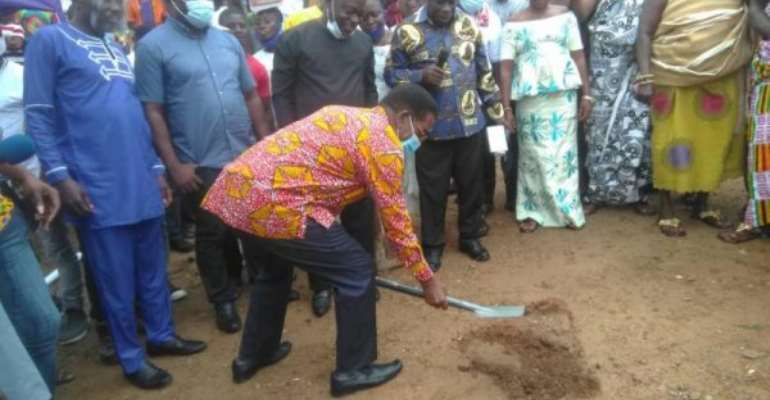 Professor Kwesi Yankah, the Minister of State In-charge of Tertiary Education, has cut the sod for construction works to begin on the ultra-modern market at Agona Kwanyako.

It will comprise of 40 stores and a 10-seater modern Water Closet (W/C) to reduce environmental health-related problems.

The project, which is being financed by the Coastal Development Authority (CODA) under the One-Million dollar per constituency programme instituted by the government, is expected to be completed in December this year.

Addressing the people, Prof Yankah said the construction of a modern market centre would enhance economic activities in the area to facilitate growth.

“The market on completion will open up this area for traders and businessmen and women from far and near to transact business to help improve the local economy”, he said.

Prof Yankah, who is also the Agona East New Patriotic Party's (NPP) Parliamentary Candidate, said the construction of the market centre was because the area lacked one.

He said the government would continue to provide infrastructure such as health centers, schools, roads, markets, electricity and to create jobs for the unemployed youth.

Prof Yankah urged the chiefs and people of Agona East to assess the three and half years of President Akufo-Addo's government and to give him four more years to make the country a better place to live.

He called on the people to ignore persons who were only interested in their selfish gains, saying the President has the track record to deliver on his campaign promises.

Mr Dennis Armah-Frempong, the District Chief Executive (DCE) for Agona East, urged the people in the Constituency to vote massively for President Akufo-Addo and Prof Kwesi Yankah in the December 7, polls.

He said the renewal of President Akufo-Addo's mandate and the election of Prof Yankah as Member of Parliament (MP) for Agona East would ensure more development projects.

The DCE said the opposition National Democratic Congress (NDC) coming back to power would spell the doom for development projects in the area.

He said Prof Kwesi Yankah had performed creditably in the three-and-a-half years as a Minister and had helped to provide more development projects in the district.

Among the projects are the provision of additional facilities for four senior High schools to promote effective teaching and learning.

The projects helped to ease the challenges of the double-track system because of the free SHS policy implementation.

Prof. Yankah is instrumental in ensuring the connection of 55 communities in the District to the national grid before the end of the year.

Nana Adjorku Abora VII, the Tufuhene of Agona Kwanyako, praised Prof Yankah and President Akufo-Addo for the bold step to construct a new market and a modern toilet.

He appealed to Prof Yankah and the government to construct a bridge over River Ayensu to avert flooding during the raining season.

He said the construction of the bridge would help the farmers to cross the river to their farms and also open up the area for development.

Nurses, teacher trainees who completed their training in 201...
6 minutes ago