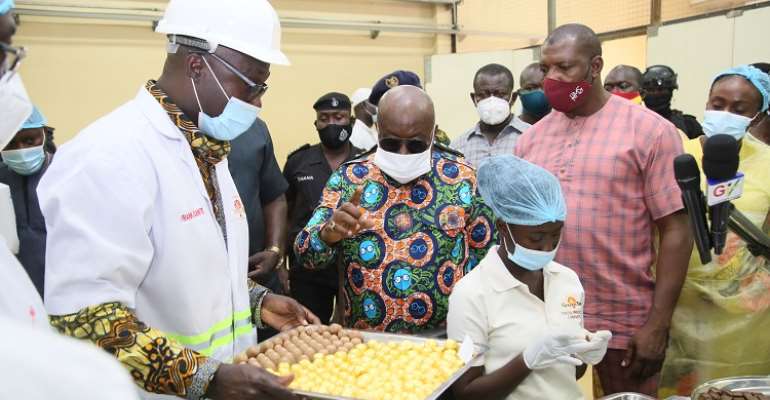 President Akufo-Addo inspecting some of the products at CPC

President Akufo-Addo has endorsed measures adopted by management of the Cocoa Processing Company (CPC) to rescue the company which is chocking under a whopping US$108 million legacy debt.

The company, which is into the processing of raw cocoa beans into semi-finished cocoa products such as cocoa butter, cocoa cake, cocoa liquor and cocoa powder as well as manufacturing of chocolate, owes to the COCOBOD alone a tune of US$88 million and over US$20 million to syndicated banks.

This came to light during a visit to the company's processing factory at Tema by President Akufo-Addo yesterday.

Managing Director (MD) of CPC, Nana Agyenim-Boateng, outlined a number of strategies they had adopted to settle the debt within the next seven years to save it from collapse.

This included a decision to invest in infrastructure and machinery, invest in the confectionary factory and improve the effectiveness and efficiency of its operations and particularly to minimize losses arising out of shortages and discrepancies.

Although CPC has a total capacity of 64,500 metric tonnes for two of its factories, audit of machines for both factories gives a performance assessment of 70% to 80%, with the current machinery operating at 74.4% capacity, producing 48,000 metric tonnes.

MD of the company said “cash flows for this injection and revamp would enable CPC to pay off all our debts and relatively expensive loans by year seven and put the company into good standing in terms of cash flows.”

President Akufo-Addo assured management of CPC “the assistance and intervention that you require of government in terms of your relationship with COCOBOD and your indebtedness to Afrexim is something we are going to have to work on together; but you will have my instinctive support.”

The President noted that the CPC was really at the cutting edge of the country’s future, and that if indeed Ghanaian industrialization was to succeed, the CPC ought to be a top priority.

“You are really at the centre of it; cocoa has been the main stay of our country for over 100 years. It is very legitimate to say that cocoa is Ghana and Ghana is cocoa. So to have this company whose aim it is to add value to our cocoa industry, makes you a very strategic company in our economic landscape,” he emphasized.