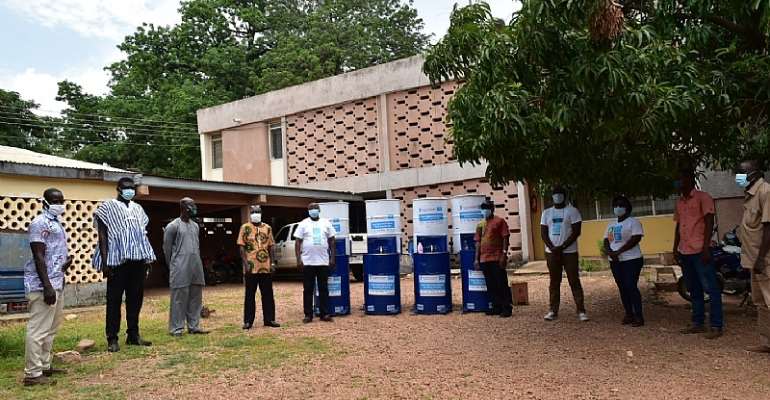 WaterAid Ghana, in partnership with the Department for International Development in the United Kingdom (DFID UK) and Unilever has presented twelve Foot-Operated (Hands-free) Handwashing facilities to six Metropolitan, Municipal and District Assemblies in the country.

The gesture was made under WaterAid Ghana’s Clean Community Hygiene Campaign for COVID-19 project, a project being funded by the DFID UK and Unilever under their global COVID-19 programme dubbed “Hygiene Behaviour Change Coalition for COVID-19”.

Washing both hands under running water with soap is one of the recommended practices to prevent the spread of the Corona Virus Disease by the World Health Organization.

At a presentation ceremony at Bongo, the Head of Programmes, who represented the Country Director of WaterAid, Mr Jesse Coffie Danku said, since the start of the project, WaterAid and its implementing partners have supported government-led campaigns against COVID-19 pandemic in the six MMDAs in mass, digital and print media along the five core hygiene behaviours recommended by World Health Organization.

He further explained that WaterAid through the project has run hygiene technical training sessions for health workers in the six beneficiary districts where the project is being implemented. This he said will help reach out to vulnerable and hard-to-reach communities who may not be reached through the mass and digital media campaign.

Mr Jesse indicated that in consonant with WaterAid’s concepts on innovation and sustainability, WaterAid collaborated with a private engineering firm, to design the foot-operated handwashing facilities, not only to ensure the hands do not get contaminated after it has been washed but also to minimise the human element of refilling the storage tanks as the facility can be connected to a piped water system.

He said the facilities have been quickly supplied to support the behaviour change campaigns as, without them, people may not get access to handwashing facilities at public places to wash their hands when they are out of their homes, though they may have heard about the importance of hand hygiene.

The project, he noted, will be training local artisans to support the production of foot-operated hand washing facilities in the various districts. This he said will help to promote local ownership, capacity and entrepreneurship whilst fighting the pandemic.

This is because the district has benefited a lot from various projects of the Organization and continues to benefit.

He said, the facilities are going to be placed at vantage points in public places to support the fight against the spread of the pandemic. Mr Kanyage equally promised to use the facilities for their intended purpose.

He thanked DFID and Unilever for partnering with WaterAid to support local assemblies in the fight against the COVID-19 pandemic.