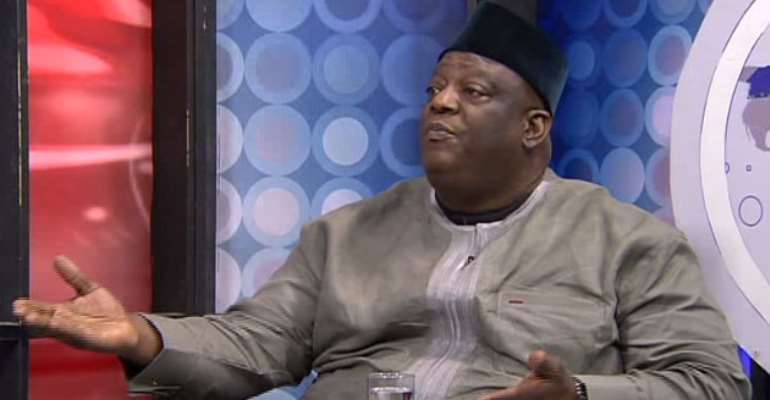 Mr Jacksons’s comment comes on the heels of a video widely circulated on social media, in which distributors of the government-sponsored hot meals to pupils sitting the BECE this year, are heard asking the beneficiaries to repeat the slogan ‘4More4Nana’ as they are handed their packs.

“And, so, it is utterly deplorable the videos we’ve seen where the students are being asked to say ‘4More4Nana’ as they pick up the package.

“That’s the wrong way of campaigning. Its utterly unethical and it should be condemned in no uncertain terms,” Mr Jackson said on the Executive Breakfast Show (EBS) on Class91.3FM on Thursday, 27 August 2020.

With regard to the same video, former President John Mahama had earlier said: “This is how low our politics has sunk”.

There have also been other videos in circulation which capture some of the pupils complaining about the quality of the food served them.

However, the Minister of Gender, Child and Social Protection, Mrs Cynthia Morrison, has said no headteacher in any of the schools in which pupils are sitting their Basic Education Examination Certificate (BECE) has complained about the quality of food being served their pupils.

“So far, no headmaster has called me to complain about the quality of food being served the pupils”, she told Kwabena Prah Jr on Accra100.5FM’s morning show Ghana Yensom on Wednesday, 26 August 2020.

Social media has been awash with pictures and videos of some pupils complaining about the poor quality of the food served them.

While some said it was bland, others claimed was salty.

However, the minister told Prah Jr that: “If you send me a picture of the food they claim is not tasty, I can’t verify from it”.

According to her, “I can only rely on the headmaster’s report but what is circulating on social media could be mischief”.

She admitted seeing one video on social in which some identifiable pupils in the Ashanti Region were complaining about the food and promised to follow up on that immediately.

The minister, however, pointed out that there are some other videos in which the pupils cannot be identified, “so, it could be mischief, it could be true”.

She also said: “If we are cooking for pupils across the whole country and only two or three places are complaining, then it means things are going on very well in the majority of the schools”.

During his 15th COVID-19 address to the nation on Sunday, 16 August 2020, President Nana Akufo-Addo directed the Ministry of Gender, Child and Social Protection to give each of the 584,000 BECE candidates a hot meal a day.

He said: “As a result of reports I have recently received that some final-year JHS students were going hungry, in complying with COVID-19 protocols, I have just instructed the Minister of Gender, Child and Social Protection to begin preparations to ensure that from 24th August up to 18th September, all five hundred and eighty-four thousand (584,000) final-year JHS students, and one hundred and forty-six thousand (146,000) staff, both in public and private schools, be given one hot meal a day”, the President said.

“This is to ensure full observance of the COVID-19 safety protocols”, he explained.