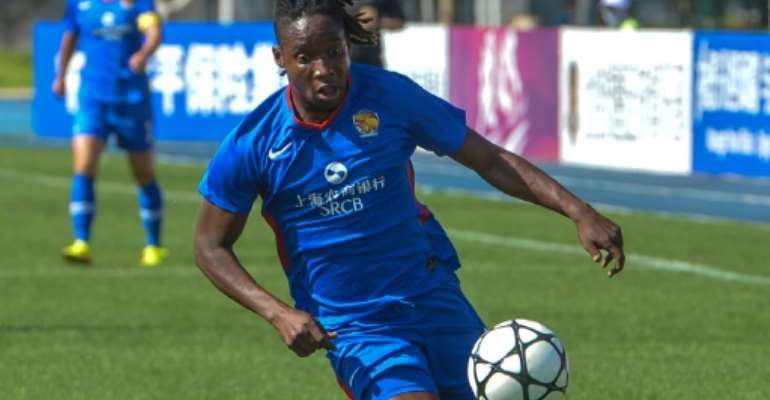 Barbra Banda of Shanghai Shengli during the CFA women's super league match against Changchun Zhuoyue in Kunming. By STR (AFP)

Barbra Banda defied her parents on the way to becoming the first Zambian woman to play professional football in Europe, then as captain led her country to a maiden Olympics.

She is also an undefeated boxer. Not bad for someone who is still only 20.

The latest chapter in Banda's journey saw her leave Spain for China, where she had to quarantine in a hotel for two weeks ahead of the new season because of the coronavirus.

Underlining that Banda is not one to waste time, the prolific striker scored just 23 minutes into her debut Sunday in the Chinese Women's Super League for Shanghai Shengli.

It was some goal, Banda picking the ball up just inside her own half, racing past two defenders and slotting home as Shanghai won 5-0. She scored twice more on Wednesday.

"I started playing football when I was a very tender age, it was somewhere between six or seven years old," Banda told AFP by telephone from the southwestern Chinese city of Kunming, where the league is taking place behind closed doors because of the pandemic.

"Actually by the time I started, I used to play with boys because the academy that I was playing for didn't have the lady's team."

That made Banda tougher.

"Whether anyone made a comment about me I was just determined because I really wanted to play football," she said.

"I thought it was my career so I wouldn't mind what people say, I'll keep on playing with the boys."

Her parents, concerned that football was damaging her schooling and saying it was not a sport for girls, were another obstacle.

"In fact I just used to run away," said Banda, who was born in the Zambian capital Lusaka, laughing at the memory from when she was a single-minded 11-year-old.

"I just had to get my boots (from home) without them knowing that I'm going to play football because if they know this they won't allow me.

"I would throw them (boots) out the window, then go out the door, and they'd think maybe she's just going outside, and then I'd go round to get them."

Banda has justified her devotion to football, spending 15 productive months in Spain with EDF Logrono before moving to China in January.

In March, just as coronavirus was bringing almost all sport to a halt, the then-19-year-old captained Zambia's women to qualify for their first Olympics, upsetting the odds.

It is fair to say that her parents are now fully behind her.

"It's just brought the happiness in the country and everyone now is talking about women's football because in Africa it's not really that developed," said Banda, who has scored at least 28 goals in 32 games for the "Copper Queens".

"So they were only concentrating on men's teams, but now at least they're talking about women."

The Tokyo 2020 Games were put back a year because of the virus, delaying also Zambia's historic tilt at a medal, but Banda says it means they now have more time to prepare.

It is a reflection of Banda's sporting prowess that it is not inconceivable that she could have made it to Tokyo by another route -- as a boxer.

Inspired by compatriot Catherine Phiri, who held a world title in 2016-2017, Banda tried boxing at the age of 16.

Perhaps unsurprisingly, she had the talent for it, racking up five victories in five professional fights.

Banda then had to make a choice, but after all she had battled with, there could be only one winner.woman

"My mind was too much into football so that's why I couldn't concentrate much into boxing," she said.

"I said I have to go with the way I'm more comfortable with."