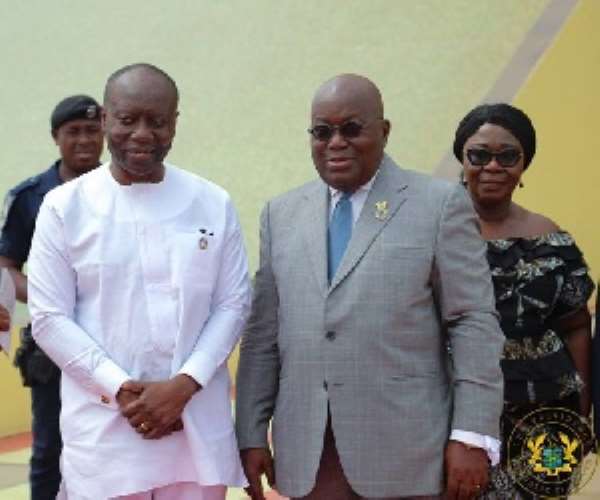 Alliance for Social Equity and Public Accountability (ASEPA) has filed an official complaint with the Commission for Human Rights and Administrative Justice (CHRAJ) against President Akufo-Addo and his Finance Minister Ken Ofori-Atta for “misappropriation of public funds, abuse of office, and corruption”, as well as “conflict of interest”, respectively, in connection with an alleged $300,000 per annum PR contract between them and US firm KRL, which, according to international investigative body Open Sources Investigation (OSI), was sponsored with the Ghanaian taxpayers’ money.

The deal, according to ASEPA, was in connection with the ‘I’M FOR NANA CAMPAIGN’ launched in the lead-up to the 2016 general elections, of whose Director was Mr Ken Ofori-Atta.

ASEPA quotes OSI as saying after the New Patriotic Party (NPP) won the elections, President Nana Akufo-Addo and Mr Ofori-Atta regularised the services of KRL, and used state funds in paying for those services every year.

The Executive Director of ASEPA, Mr Mensah Thompson, thus, wants CHRAJ to probe the President and his cousin over the matter.

We write to your office pursuant to section 7(a)(e) of the CHRAJ Act to commence investigations into the KRL-NPP [deal] in which public funds were allegedly used to pay for contracted private services rendered by KRL to the ‘I’M FOR NANA FOUNDATION’, a foundation created by the NPP to fund the 2016 campaign of President Akufo-Addo.

Below are a few facts provided by the international investigative body, Open Sources Investigation, OSI.

1. That on 1 June 2016, American PR firm, KRL, was engaged by the I’M FOR NANA FOUNDATION headed by Ken Ofori-Atta, Ghana’s current Finance Minister, to provide lobbying services for the NPP.

2. That among other services, KRL was contracted to; (a) support free and fair elections in Ghana in favour of President Akufo-Addo, herein referred to as the 1st Respondent; (b) advise the 1st Respondent on communication strategies ahead of the elections; (c) provide lobbying services with the US government, donor communities and the media; (d) provide in-country support throughout the electoral process.

3. That after the elections, and the 1st Respondent assumed power, the arrangement with KRL was then regularised, providing same services at a cost of $300,000 per annum, excluding other miscellaneous costs to President Akufo-Addo and his party, the NPP.

4. That after the 2017 regularisation of the above arrangements, payments were made to KRL for the same services directly from the Office of the President using state funds.

We are hereby filing an official complaint against President Akufo-Addo, the 1st Respondent, for misappropriation of public funds, abuse of office, and corruption.

We also bring an action of conflict of interest against Mr Ken Ofori-Atta, the Finance Minister and Director of the ‘I’M FOR NANA CAMPAIGN’.

What KRL says it did for Akufo-Addo

In the run-up to the legislative and presidential elections in Ghana of December 2016, KRL was hired as communication and general political consultant by the campaign of Nana Akufo-Addo of the New Patriotic Party.

The NPP had been out of power for eight years following two unsuccessful presidential bids by Akufo-Addo.

An electorate frustrated by the sluggish economy and mismanaged power sector gave the opposition an edge, but the incumbent still had advantages in terms of media access and campaign resources; polls showed a significant proportion of the population undecided. Given the tight nature of the election, there were concerns over potential manipulation of the electoral process, generating a charged political environment.

Through an extended period of embedding on the campaign trail, KRL integrated into operational units of the local team. KRL consultants helped craft a communications strategy using polling results and other forms of local data, managed local media monitoring and message coordination, arranged interviews with the foreign press, prepared the candidate for speaking events and helped with outreach efforts to voters and party poll watchers.

KRL also encouraged direct lines of communication between the campaign and election observers to help build confidence among all stakeholders in the process. Thanks to a combination of international observation, a robust party poll-watching effort, and careful management of internal campaign dynamics, KRL was instrumental in diffusing tensions in the post-election period and helping to manage a peaceful transition.