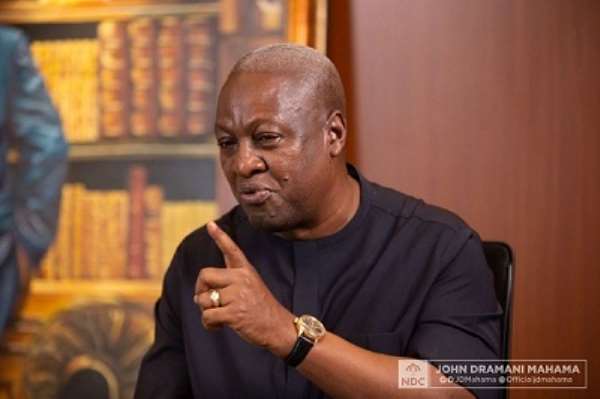 Former President John Dramani Mahama has promised to give back all mining concessions that were taken away from its original owners as part of the Akufo-Addo government's fight against galamsey.

Mr Mahama said the move to return the concession and excavators back to the small scale miners is to ensure every Ghanaian benefit from the national cake.

The NDC flagbearer was speaking at the introduction of his running mate, Prof Naana Jane Opoku-Agyeman, to Asantehene Otumfuo Osei Tutu II at the Manhyia Palace on Wednesday, 26 August 2020.

Some of the miners' concessions were allegedly taken away from them and their excavators seized.

The former President said: “The other time, I was speaking about small scale mining business. People paid money to acquire concessions legally from the Mineral Commission. When there was a change of government, those concessions, have been taken away from those people and given to those they want to give it to. We’re all one people in Ghana, everyone must benefit from our country, regardless of where you come from. Whether an Ashanti, Akyem, Ga, Ewe or Dagomba, we’re all Ghanaians.

“Lately it looks like we’re being selective, if you don’t belong to a certain party, they take away your concession. They have taken away people’s excavators to give to party members to work. The NDC is, however, saying that, we stand for social justice, so God willing when we come back into power, we’ll correct all these mistakes, we’ll retrieve the concessions and give them back to the rightful owners. We’ll make laws such that the country will benefit from the mining without destroying our lands and water bodies.”

Mr Mahama revealed that a future NDC administration will ensure that no land is destroyed in the process of mining.

“There are lots of things we can do to ensure that the country benefits from mining. God blessed us with it so it is pointless using military men to chase these youth to kill them. So as for us, we’ll make new laws to ensure development in our country,” Mr Mahama stated.