Politics Is A Contest Of Ideas, Development — Otumfuo To Political Parties 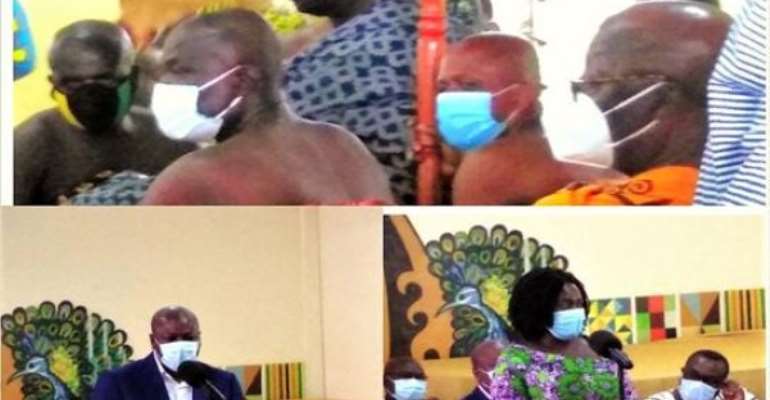 The Asantehene, Otumfuo Osei Tutu II, has advised politicians to tell their followers and Ghanaians what they intended doing to transform the lives of the people for the better, as they solicited for votes ahead of the December General Election.

Politics, according to the king, was a contest of ideas and development.

Hence, it was important that the contesting political parties strived to explain their manifestoes and development agenda to the people.

Otumfuo Osei Tutu explained that this was necessary to help Ghanaians to make informed decisions in the choice of their leaders.

He gave the advice when the former President and flag-bearer of the National Democratic Congress (NDC), Mr. John Dramani Mahama, and his running mate, Professor Naana Jane Opoku-Agyemang, paid a courtesy call on him at the Manhyia Palace, Kumasi.

The visit was to officially introduce the two NDC leaders to the king and also ask for his spiritual support as the largest opposition party seeks to regain power in the impending presidential and parliamentary elections.

Otumfuo Osei Tutu appealed to all the contesting parties and their supporters to avoid violence in all its forms.

He tasked them to be tolerant of divergent views, stressing that the nation needed peace and unity to enhance political stability and sustainable socio-economic growth.

“It is God who chooses who becomes the President,” the Asantehene stated, and asked the contesting political parties to always conduct their activities in a peaceful mood.

The Party is embarking on its campaign ahead of this year's elections, promising to bring development to the educational, health, agricultural and mining sectors.

Additionally, job creation, infrastructural development and economic transformation are also on the Party's agenda if given the mandate.

Former President Mahama, touching on roads, assured that the NDC if given the nod would work assiduously to improve the Accra-Aflao, Accra-Cape-Coast, Accra-Kumasi and the Eastern Corridor roads.

There are plans to also put to good shape the Eastern Rail Line to boost socio-economic activities.

Prof. Naana Opoku-Agyemang, was grateful to the Asantehene for granting the two leaders an audience, saying the NDC stood for peace and development.