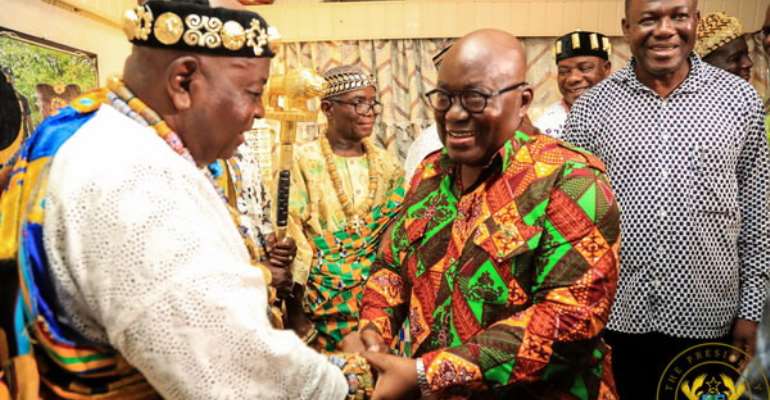 President Akufo-Addo will on Thursday, August 26 cut sod for work to begin on the Keta Water Expansion project in the Keta Municipality of the Volta Region.

The project when completed is expected to supply potable water to over 400,000 people living in three districts; Keta Municipality, Anloga District and South Tongu District

The sod cutting forms part of a day’s working visit of President Akufo-Add to the Volta Region.

The tour will see the President paying a courtesy call on the Awomefia of the Anlo State, Torgbui Sri III as well as other Chiefs and Queen mothers of the Anlo area.

This will be followed by a radio interview on Sandcity Radio (88.9mhz) in Keta.

He will then inspect a TVET project at the Atorkor Vocational Training Institute.

The day will end at Agordome where he will cut the sod for the Water Expansion project to commence.

The funding for the project was approved by parliament in March this year after a request for the approval of the funding agreement was laid in February, 2019.

DGN Online believes the COVID-19 pandemic may have stalled the commencement of the project which is funded by a €97.18-million credit facility agreement between the government and the Deutsche Bank with support from the Italian Export Credit Agency.

Chairman of the Finance Committee of Parliament Dr Mark Assibey-Yeboah, while reading the committee’s report in the House early this year said, the Agordome-Sogakope water supply system was built in 1998.

It took its raw water from the Volta Lake, processed it and supplied water to Sogakope, Keta and other surrounding towns and villages.

After two decades of producing 7,200 cubic metres (m3) of water per day, the treatment facility has been unable to meet the population and economic growth in the southern part of the Volta Region.

To improve the situation, the Ministry of Water Resources and Sanitation contracted Messrs Lesico Infrastructures S.R.L. to carry out an assessment of the Keta water supply system.

The assessment concluded that the facility required urgent rehabilitation and expansion to ensure continuous water supply to meet the growing demands of the area into 2030 and beyond.

The project is expected to among others have an intake facility with a capacity of 9.3 million gallons per day, a 7.7 million gallons conventional water treatment plant and a 62-kilometre transmission pipeline from Agordome to Keta through Anloga.

It will also have a booster station and storage tanks, a rehabilitated and extended distribution network with approximately 80km of pipes, the supply of 8,000 domestic metres and spare parts as well as the rehabilitation of the existing water treatment plant to a new capacity of 78,200m3 per day.