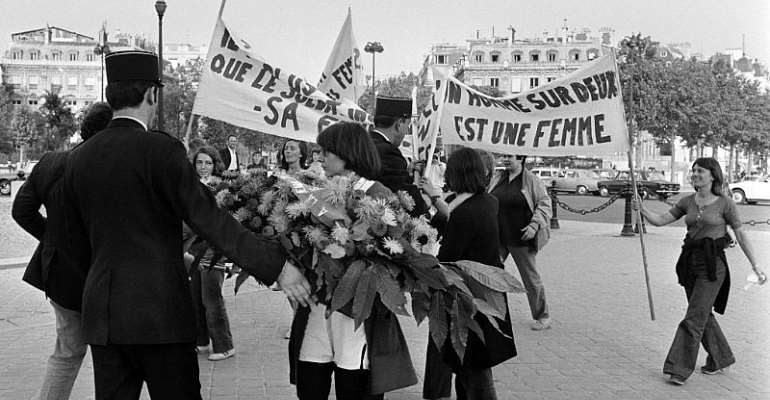 50 years ago on Wednesday a handful of feminists tried to pay homage to “the wife of the unknown soldier” at Paris's Arc de Triomphe. It marked the birth of the women's liberation movement (MLF) whose campaigns for abortion rights and against sexual violence profoundly changed French society.

On 26 August 1970, nine French women set out to lay a wreath at the foot of the Arc de Triomphe. Its inscription read: “There is one person more unknown than the unknown soldier, his wife”.

The date had been carefully chosen to coincide with the US where women were marking the 50th anniversary of their right to vote. Their French feminist counterparts wanted to mark that day with aplomb.

“We told ourselves we really had to strike a blow,” writer Cathy Bernheim, one of the nine women, told France Info TV. The famous monument was a good place “to try and get the message across that 'one man out of two is a woman'”.

That slogan, emblazoned on their banners, has gone down in history. But it baffled police at the time.

Turning to one of the women who had just come back from studying in the States they said: “Do you really believe that one out of two of our French men are not virile?”

The media were fascinated but equally at a loss as to what to make of these young feminists chanting songs as they marched up the Champs-Elysées.

“It was so unexpected for women to assert themselves simply as women, that journalists and police didn't understand a thing,” Bernheim said.

She recalled being marched off to the police station where they continued to sing.

“It was so unlike any other form of serious political action. That's why it had such an impact on people.”

It was August, there wasn't much going on news wise. The media lapped up the story. The MLF had made its media coming out.

Setting May '68 straight
The MLF was not a structured movement, but emerged out of May '68 which despite freeing up sexual mores and shaking up political institutions, remained very male-dominated.

“There was structural sexism in political organisations whether unions, political parties or hard left movements. Leadership was a male thing and women who joined the [May '68] movement were given only subordinate roles. It led women to think about an independent women-only movement.”

There were existing feminist movements in France such as the Movement démocratique féminin, which encouraged reflection on the status of women on the Left.

But MLF militants were different. “They were part of this revolutionary, Marxist thought and their vision broke away from the established social order,” said Pavard, author of a recent book on the history of feminism.

Key struggles
Over the next decade the movement brought new feminist voices to the fore.

Antoinette Fouque, a key, if controversial, MLF figure, founded the “Psychoanalysis and politics” collective which defended a specifically female libido, in opposition to Freudian theory.

They campaigned relentlessly for the right to abortion, to free contraception, against rape, and denounced housework as a form of exploitation.

To spread their revolutionary ideas they launched Le Torchon Brûle (The dish rag is burning) in 1971: a play on words using the notion of rag as both newspaper and tea towel.

The right to choose
MLF undoubtedly played a key role in the decriminalisation and then legalisation of abortion in France.

In 1971, an MLF demonstration drew some 2,000 mainly young women on to the streets of Paris, echoing other demonstrations in favour of abortion rights in the US, Canada, Italy and Germany.

MLF's campaign followed the 1971 Manifeste de 343 in which figures like Catherine Deneuve and Simone de Beauvoir publicly admitted they had had illegal abortions.

In 1972, the Veil law, named after then health minister Simone Veil, decriminalised abortion and by 1975 it was made legal.

By 1974 the contraceptive pill became freely available and reimbursed by the state.

Defending women
In 1971 MLF supported pregnant teenagers at the Chateau de la Solitude near Paris who had gone on hunger strike. Most of the young girls had fallen pregnant after being raped.

Bernheim remembered the shock of discovering the conditions the girls were in.

“Girls as young as 14 or 15 were taken out of school when they got pregnant and put into institutions like this, scarcely better than prisons. They gave birth and were marginalised.”

Alerted by MLF, Simone de Beauvoir visited the institution and her criticism helped lead to its closure in 1976.

Housework is work
MLF raised awareness over the thorny subject of housework, which they viewed as a form of submission and slavery. "The private is political" was one of their slogans.

But they also used humour to get their message across asking “Workers of the world, who is washing your socks?”

“MLF's image is sometimes deformed, seen as a very radical, hard movement,” said Pavard. “In reality the members often reflect on happy times, the joy of being together and taking collective action. There's a lot of humour and humour is a way of destabilising the established order.”

Although the principle of gender pay equality was inscribed into law in 1972, housework remains unpaid.

MLF legacy
According to a recent BVA poll the figures who most embody feminism for the French are Simone de Beauvoir, Simone Veil, Michelle Obama, Malala Yousafzai. Members of MLF were not cited.

“The movement is largely unknown to the general public and to young generations of feminists,” Pavard explained. “The history of this movement isn't taught. It hasn't managed to get itself passed on.”

And yet “MLF managed to transform French society in a very big way,” she continued. “The mobilisation around contraception, abortion and rape led to changes in the law.”

Meanwhile, the younger generation of feminists who so effectively use social media to advance their causes, most recently around the #MeToo movement and the fight against conjugal and sexist violence, may well be more influenced by their predecessors than they realise.

Femen, La Barbe and Les Colleuses (who are sticking shock slogans against conjugal violence in public spaces) have all learned that strong, visual actions, like laying a wreath at the Arc de Triomphe, can help bring about social change.