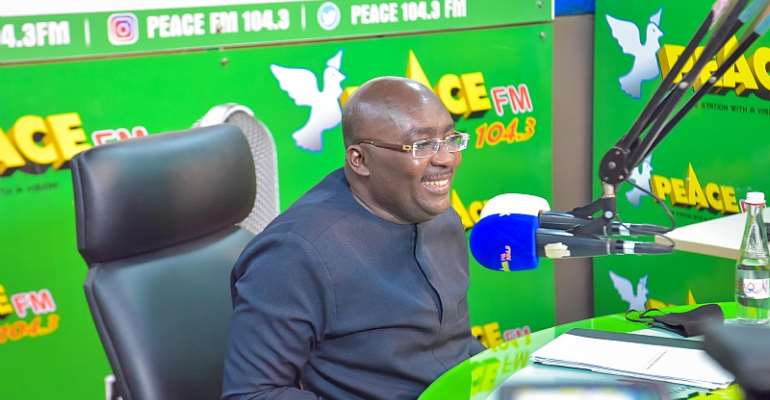 Speaking in an exclusive interview on Peace FM's Morning Show Kokrokooo, the Vice President said the government's bold action is an unprecedented display of transparency and accountability of government records in the country and on the African continent.

"We have put together what we have done across all districts to allow people to check for themselves," Dr Bawumia said.

"This is the first time this has happened in Ghana and Ghana is the first country in Africa to do this. No country has done this," Dr. Bawumia said that.

The opposition NDC has been attempting to downplay the concept, and have listed about 26 out of the nearly 18,000 projects the government has listed on the website as non-existent.

But Dr Bawumia, who explained a few of the ommissions as inadvertent swapping of projects between districts, said the NDC, instead of seeking to find non-existent faults, should rather emulate the laudable initiative of the NPP and also subject their achievements for public scrutiny.

"The benefit of the transparency we have introduced has allowed the NDC to interrogate what we have put out."

"The country has to be proud of what the NPP has done with this innovative website and I challenge the NDC to put out what they have done in detail for us to also interrogate what they claim they have done. I tell you they cannot do it."

On the functioning of the government's delivery tracking website, Dr Bawumia explained that it is a platform which continues to update government's infrastructure records as and when the projects progress, adding that officials have also amended certain projects that were wrongly placed under different districts.

"When I made the lectures, I clearly stated that this will be a live website and we will keep updating it as projects develop. It is a live website which inputs projects we have done submitted by MMDCES," Dr. Bawumia explained.

"Many projects that were not captured by the delivery tracker have now been captured. We have had a lot of our MMDCEs submitting projects which we didn't even capture, and those we inadvertently placed under different districts have also been corrected."

During the live programme, people sent messages to dispute the NDC's claim that some of the NPP projects listed on the tracking websites were non-existent.

Beyond accounting to the people on its infrastructure delivery, Dr. Bawumia said the delivery tracker will also help the government in decision making going forward.

"The tracker will help us further in preparing our new budget because we will be able to monitor sector by sector, and avoid duplicating projects when similar projects are completed or ongoing."