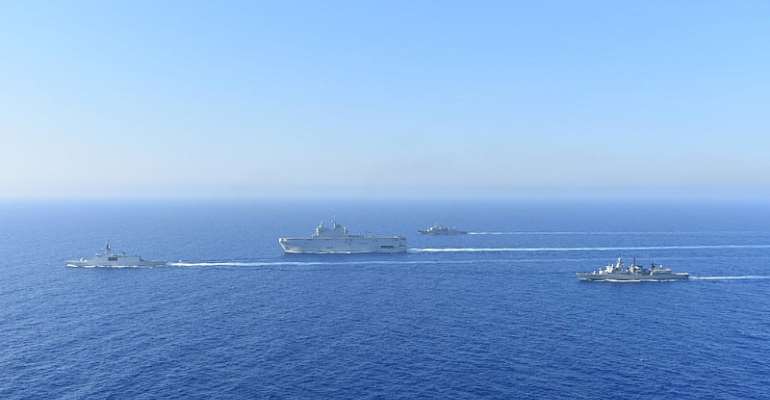 via REUTERS - GREEK MINISTRY OF DEFENCE

France joined Greece, Cyprus and Italy for navy exercises in the eastern Mediterranean on Wednesday, against the background of a dispute with Turkey over gas resources, a row which has forced the European Union and its member states to juggle a number of priorities.

France's government said Wednesday three Rafale fighter jets and one frigate equipped with a helicopter would be part of Cypriot, Italian and Greek joint exercises in an area of the Mediterranean whose strategic importance has grown with the discovery of gas deposits.

“Our message is simple: priority for dialogue, cooperation and diplomacy so that the eastern Mediterranean becomes an area of stability and respect for international law,” French Armed Forces Minister Florence Parly said on Twitter.

“It is a shared asset that should not be a playground for the ambitions of some,” the minister added in an apparent reference to Nato-member Turkey, which has sent a warship-protected prospecting mission to the waters around Cyprus and the Greek island of Crete.

“Turkey will take what is its right in the Mediterranean, in the Aegean and in the Black Sea,” Erdogan said. “Just as we have no eyes over anyone's territory, sovereignty and interests, we will never compromise on what belongs to us.”

The military manouvres come as European Union foreign ministers are set to hold informal talks on Thursday and Friday. Greece is expected to push for sanctions, but its fellow EU member states have a mixed set of priorities in the standoff.

Franco-Turkish tensions have already been rising over Ankara's role in Libya, and French President Emmanuel Macron has called for the EU to show solidarity with Greece and Cyprus.

Germany meanwhile has emphasised a need for dialogue between Ankara and Athens, with Foreign Minister Heiko Maas calling on each side to defuse the row and avoid a “catastrophe”.

“The idea that there are massive resources in the eastern Mediterranean that can be exploited economically is far from certain, so this seems very much at this moment a symbolic battle that under no circumstances should escalate,” says Gerald Knaus, co-founder of the think tank European Stability Initiative.

“France is sending a signal that it stands with Greece, which is useful as long as the other goals, to prevent escalation and to gain time for negotiations, are not lost sight of.”

“In Turkey, it has been very easy for the government to stir up emotions and get wide public support for its very aggressive rhetoric and actions,” Knaus says. “Turkey presents itself, and I think a lot of Turks feel this way, as having been reacting to provocations from others.”

Since this position clearly does not correspond to how Greece and Cyprus view an area that they consider to be within their territorial waters, EU ministers are essentially faced with a choice of escalating tensions or seeking other solutions.

Knaus suggests diplomacy would be fruitful if it focusses on renewing EU-Turkish cooperation on migration or aligning environmental objectives with other means of energy production and cooperation.

“We are talking about exploration of gas in the eastern Mediterranean at a time that western Mediterranean countries like France, Spain and Italy have given up looking for fossil fuels, at a moment there is huge pressure to make a transition to other forms of energy,” he says.

“We have a dispute that seems very early-twentieth-century at a time we have a wide growing understanding that fossil fuels need to remain in the ground. So it should be possible with creative diplomacy to find a solution where perhaps nobody is looking for gas in the eastern Mediterranean and the EU uses its leverage to offer support for development of alternative energies in Cyprus, Turkey and Greece.”