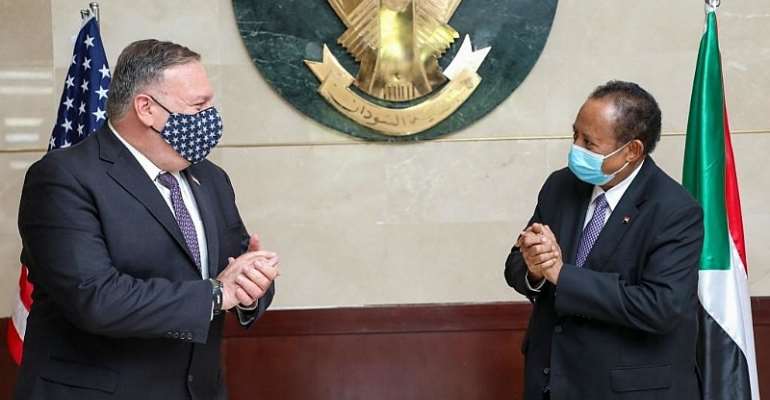 In a landmark meeting between US Secretary of State Mike Pompeo and Sudanese Prime Minister Abdallah Hamdok in Khartoum on Wednesday, Pompeo spoke about normalising the relationship between Sudan and Israel as well as Sudan's position on the US state-sponsored terrorism list.

It was the first visit in 15 years by a US Secretary of State to Sudan.

Striking Sudan's name from the terrorism list “remains a critical bilateral priority for both countries,” according to the statement released from the US State Department after the meeting.

Although the 280 million-euro payout for victims of terrorism was not explicitly mentioned in the summary of the meeting, Pompeo has in the past pushed for Sudan to pay the compensation package for the 1998 bombings of two US embassies in Kenya and Tanzania, most recently as late last month.

"I think lifting the state sponsor of terrorism designation would be a good thing for American foreign policy," he said at a hearing in the Senate foreign relations committee on 30 July, stressing that any deal would have to look after the victims.

If the compensation were to be paid, Sudan would not immediately be struck off the terrorism list, either. It would need to pass through Pompeo to the US president before being reviewed by Congress. Legislation would need to be passed before Sudan could be taken off the list.

Sudan's transitional government has been grappling with a growing economic crisis, inherited from decades of mismanagement and corruption under ousted president Omar al-Bashir, and exacrbated by the Covid-19 pandemic.

“The state budget is deep in the red, amid crippling shortages of basic commodities, extended power outages and soaring inflation,” according to a recent report by the International Crisis Group.

Pompeo, who had flown from Tel Aviv on his Middle East diplomatic tour to Khartoum on Wednesday, spoke to Hamdok about “positive developments in the Sudan-Israel relationship,” according to the US statement.

Hamdok told Pompeo that the transitional government is not authorised to decide on normalising relations with Israel.

One week ago, Sudanese spokesperson Haider Badawi Saddiq was fired after speaking to the news media about the imminent signing of a peace deal between the two countries.

One-fifth of illegal working migrants in Israel are Sudanese, and normalising relations could expedite the deportation process between the two countries, as Sudanese are usually deported to Egypt due to lack of diplomatic ties with Israel.

Eight Arab states, including Sudan, signed the Khartoum Agreement in 1967 that is better known as the “Three Nos”: no peace with Israel, no recognition of Israel, and no negotiations with it.

Hamdok and Pompeo also spoke about Sudan's ongoing transition process as well as peace and security in Darfur. According to a statement from Hamdok's office, he also spoke of his concern for civilians in Darfur and discussed the establishment of better security for their well-being.

The statement added that Pompeo and Hamdok also acknowledged that agreement on the Ethiopian Grand Renaissance Dam, a giant hydropower facility on the Blue Nile, was crucial to regional stability.