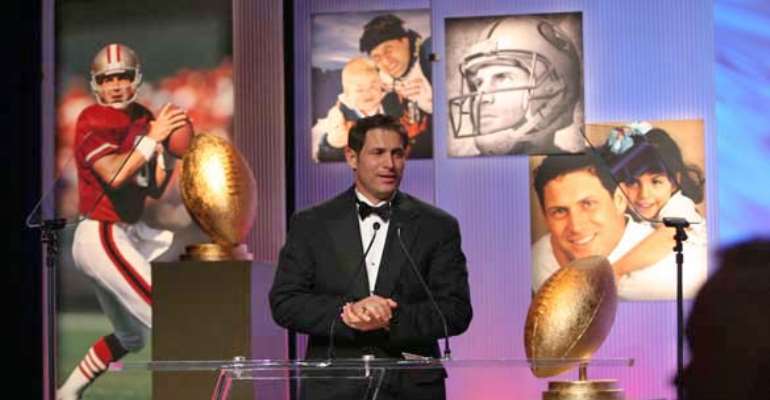 Steve Young says "we'' and "our'' when he talks about the logistics of doing commentary for ESPN's "Monday Night Football" telecasts. "It doesn't take up a lot of our time.'' "We can do it as long as it doesn't interfere with everything else.'' More of a team player than ever, he lets two rambunctious little boys, a baby girl and his wife of six years call the plays now.

During his days as the 49ers' quarterback, Young's postretirement ambitions always made for interesting speculation. Without really trying, he promised to be one of those rare athletes who transcended sports, like a Bill Bradley or Jim Brown or, in modern times, Dikembe Mutombo. Would he run for office, becoming the next Bill Bradley? Work as a public defender, one of the goals he considered after getting his law degree from BYU between NFL seasons? Go on a belated Mormon mission?

This first stage of his postfootball life, as it turns out, has been about high-level multi-tasking, the kind usually associated with working moms. He has two everyday jobs, one as a managing general partner of a private equity firm, Sorensen Capital, which emphasizes investment in smaller Utah businesses. He essentially telecommutes from his Palo Alto home, relying on a Blackberry while he performs his other job, the one he publicly pined for as a bachelor quarterback: being Dad.

One afternoon early last week, he found time to do an interview on his backyard patio while his sons -- 5-year-old Braedon and 3-year-old Jackson -- played on a small trampoline and took swings at a baseball. Their sister, 3-month-old Summer Ann, had entered the house, her father toting her baby carrier over his arm, after riding in the family minivan on a mission to collect Braedon from kindergarten.

In this remarkably domestic scene, Young began talking about traveling to West Africa. He and wife, Barb, plan to visit Ghana next spring as part of a philanthropic inspection tour. The Forever Young Foundation, the charitable enterprise that Young started 13 years ago, has involved itself in three projects there, and a traveling party of about 40 staff and board members, plus major donors, will go to see the results. Young won't be the only athletic heavyweight on the trip.

Boston Celtics Director of Basketball Operations Danny Ainge, a foundation board member whose son served a Mormon mission in Ghana, will join the group. The former Celtic player and Young, whose BYU careers overlapped by one year, have been friends for ages.

Speed skaters Johann Olav Koss and Joey Cheek, who famously donated his $40,000 in Olympic prize money to the international children's organization run by Koss, are on the guest list as well. Cheek may not be able to attend, but Koss will be there. Right to Play, his aid group, is helping to coordinate the trip.

In fact, Koss is traveling to Ghana in three weeks to check on the progress of Right to Play's programs there, which are being upgraded thanks to a $100,000 donation from Forever Young. It took an elaborate relay of nonprofit networks, and famous athletes, to advance the money to West Africa.

First, a Utah nonprofit called Operation Kids decided to devote its annual spring gala to honoring Young for his induction into the Pro Football Hall of Fame last year. The dinner -- "the biggest fund-raising event in Utah every year'' according to Young -- would generate funding for Forever Young, which would then pass along its donation to Right To Play. Cheek and Koss both attended the event, along with Jerry Rice, Bill Walsh, Steve Mariucci and Ronnie Lott.

From that elite gathering came the resources to train coaches and buy equipment for children who may never have had an actual ball to kick.

Young and Koss met at the Salt Lake Olympics, where they were introduced by Ann Romney, wife of Massachusetts governor and Olympic organizer Mitt Romney. She recruited Young to help Koss' organization during the Games, and pretty soon, the former quarterback had become the lone NFL player on Right to Play's list of athlete/ambassadors. (Mutombo is the only NBA player, and Koss says that Lott, while not formally an ambassador, has contributed generously to the program.)

"I have so much respect for what Johann does,'' Young said. "He understands how sports can do things for children that can change the way they see themselves and the world.''

Forever Young backs an organization that helps teach disabled children how to ski, and the former quarterback has been known to get right in the middle of the kids, playing with them on the slopes.

"You can see their faces light up as they start to realize what they can do, and we know that it changes their perception of themselves,'' he said. "It's shocking to hear what the parents say about the development of their kids once they have this opportunity''

The trip to Ghana is intended to give Young and his foundation donors the chance to see the same kind of results, which can't be captured in a brochure or annual report. Forever Young was drawn to Ghana because Bob Gay, a retired financier and member of the foundation board, is serving three years there as a volunteer for the Mormon Church, supervising its young missionaries.

Young himself teaches the equivalent of Sunday school at Palo Alto's Church of the Latter-Day Saints. He and Barb recently hosted a large family reunion on the beach in Aptos, where they conducted a naming ceremony and blessing for Summer Ann.

"It's funny, you know, when (someone asks) about being involved in the church, because it's more how you live than anything,'' Young said, pausing to think and smile. " 'How involved are you?' 'Well, I'm breathing, so...' "

As ever, he lives modestly for a man of his means. Still affiliated with Toyota, the sponsor that rode Young's self-effacing humor to TV commercial nirvana, he drives a hybrid Prius when he doesn't need the minivan. His charity golf tournaments operate on the same philosophy. He recruits celebrities, but offers fewer perks than some of the more lavish tournaments, allowing more money to reach the designated charities.

"If we fly in guests, Steve decided we could work with the airlines to see if they will upgrade people for us, but we can't pay for first-class tickets,'' said Sterling Tanner, the executive director of the Forever Young Foundation. "His theory is that if a tournament doesn't raise a significant amount of money, it's not worth everybody's time.''

For his Bay Area tournament, Young went after a blue-chip recruit this year. Rice has not only agreed to play, but Young hopes they will end up as co-sponsors. Those two names would be a powerful draw for an event that charges $25,000 a foursome.

"We asked him what he thought of the Steve Young-Jerry Rice Golf Tournament, and Jerry thought about it for a second and said: 'How about the Jerry Rice-Steve Young Tournament?' " Tanner said, laughing.

Either way, it will be good to see them on the same team again. The last cause they pursued together made out pretty well.

Parliament urged to investigate roles played by SEC/EOCO in ...
36 minutes ago