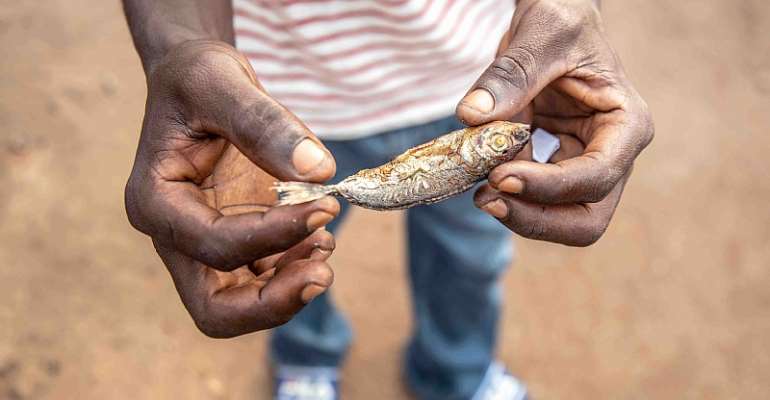 A Chinese-owned fishing trawler has been re-licensed to fish in Ghana, despite being caught for illegal fishing twice and failing to pay its fine. In June 2019, the Lu Rong Yuan Yu 956 was apprehended in Ghanaian waters with illegal nets and undersized 'small pelagic' fish on board – the staple catch of artisanal fishers. The full fine of US$ 1 million was issued, but the vessel owners failed to pay: in May 2020 the vessel was caught again for almost identical offences. Despite this clear track record of illegality, the vessel has now been licensed to fish while it awaits a further hearing.

The Lu Rong Yuan Yu 956, which is operated by the Chinese company Rongcheng Ocean Fishery Co Ltd, was apprehended twice, in 2019 and 2020, for using nets with a mesh size below the legal minimum and taking fish smaller than legal landing size. While the vessel was authorised to catch bottom-dwelling species, significant quantities of small pelagic species, such as the severely depleted sardinellas, were found on board.

The use of illegal nets is often associated with the damaging practice of saiko, as trawlers use them to illegally target the main catch of artisanal fishers – small pelagic fish, also known as the 'people's fish'. Once caught, they transfer the catch at sea to specially adapted boats and sell this stolen fish back to local communities at a profit.

This represents a worrying threat to livelihoods in coastal communities. At a time when local fishers should be recording bumper catches, they report returning to sea with empty nets as fish populations collapse. Meanwhile repeat offenders, such as the Lu Rong Yuan Yu 956, are still out at sea.

Re-licensing of the vessel may also be inconsistent with legal requirements. The 2002 Fisheries Act states that the Fisheries Commission should not recommend the renewal of a fishing licence where there is a failure to satisfy a judgment or determination for illegal fishing. It seems that the fines issued to the vessel in 2019 are determinations that have not been satisfied.

Under international law, Ghana has a responsibility to establish a system of deterrent sanctions that deprives offenders of the benefits gained from illegal fishing. Ghana's system of fisheries sanctions was upgraded in 2014 through adoption of new legislation following a warning from the European Commission for failure to meet these international obligations. Yet, this case highlights that the system is still not working: the vessel simply refused to comply with the sanction it was given, and was caught again for the same illegal fishing offenses. Clearly the owners were undeterred.

Executive Director of the Environmental Justice Foundation Steve Trent said: "It is vital that all parties remember that this Chinese trawler was fishing illegally in Ghana's waters, stealing from its people and damaging its environment. These are serious crimes that are causing long-term damage to Ghana, its economy and its people. So, when this case is heard by the out-of-court settlement committee it is vital that the fines imposed meet at least the statutory minimum. The outcome of the committee must also be registered formally with the court, so that it can be fully enforced, and published on the Ministry's website for full transparency. It is crucial that all cases of illegal fishing in Ghana are treated rigorously, so that perpetrators are prevented from committing these crimes again.”

The case raises concerns as to the efficacy of Ghana's system of out of court settlements to deal with the perpetrators of illegal fishing. In the vast majority of cases, vessel operators opt to have cases heard out of court. Yet, while fines imposed should be no less than the statutory minimum, in practice, fines are often lower than the minimum, and in some cases, such as the present, go unpaid. There is a lack of transparency around individual cases which leaves the process vulnerable to external interference and potential abuse.