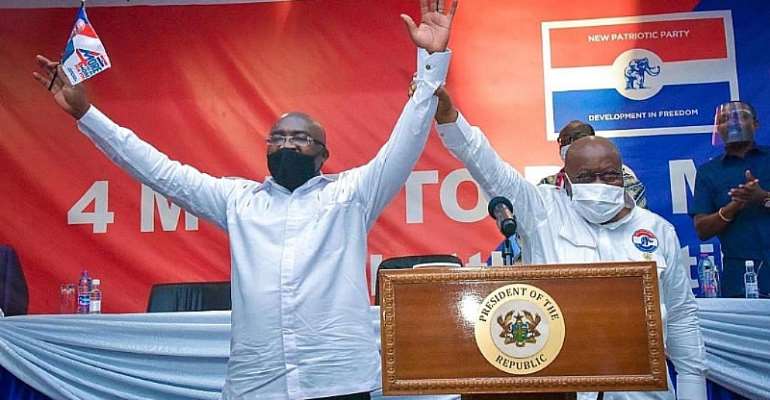 The ruling New Patriotic Party (NPP) is targeting 60 per cent of the presidential votes in the upcoming December general elections.

The Party is also rallying to secure 180 out of the 275 seats in Parliament.

The Party obtained 53.07 percent in the presidential votes in the 2016 elections and 169 seats in Parliament.

Mr Fredrick Fredua Anto, First Vice Chairman of NPP who made this known said, the Party was going all out to establish itself as a preferred political party, which was focused and committed to transform the nation and improve the lives of all citizens.

He was speaking at separate ceremonies to inaugurate constituency campaign teams for the Party's 2020 presidential and parliamentary elections at Old Tafo, Suame and Oforikrom Constituencies in Greater Kumasi.

Mr Anto said though the task was onerous, with hard work, dedication and commitment of all members, the Party would be able to achieve that feat.

He said the government, under the leadership of President Akufo-Addo, had worked hard to transform the country and improve the living conditions of the people in its first term of office.

This, he charged members of the campaign teams to go all out to preach the good works of the Party in government to enable the people appreciate and retain the Party in power.

Mr Anto said the beneficiaries of the free senior high school policy alone, could change the tables in favour of the Party and urged Party members to capitalize on that and work to attract such people to vote massively for the NPP to sustain that policy.

He said Ashanti Region was critical in achieving the Party's target and said the 90 votes the Region had targeted to achieve in the December elections should occupy the minds of all Party members.

Mr Vincent Ekow Assafuah, Parliamentary Candidate for Old Tafo, said with unity of purpose, members would work to achieve the target set for them.

Mr Bright Osei Agyeman, Chairman of the Suame Constituency, said members of the campaign team, together with the rank and file of the Party would continue to work hard to increase the votes of the Party to help retain the government in power.

Dr Emmanuel Marfo, Member of Parliament for Oforikrom, said the constituency had seen incredible increases in its electoral fortunes over the years.

Members, he said, were ready to work to achieve the 90 percent votes targeted in the Constituency and called for all hands to be on deck to achieve that feat.

Meanwhile, Mr Bernard Antwi Boasiako, Ashanti Regional Chairman of the NPP, has asked members of the Party not to be complacent over the achievements of the government and go to sleep.

He said though the government, under President Akufo-Addo, had demonstrated commitment and leadership to improve the lives of the people, party members needed to go all out to tell the story to the people.

This was the only way the people would know and appreciate what the government had done.

Mr Antwi made the call at the inauguration of the Kwabre East constituency campaign team of the party for the 2020 elections, at Mamponteng.

He urged members of the team to unite and work together with all other members and supporters to undertake massive house-to-house campaigns in all communities to drum home the achievements and the message of the party going forward to the 2020 elections.

Ms Francisca Oteng Mensah, Member of Parliament for the area, said the Constituency was this time, working to obtain 100,000 votes as against the 80,000 obtained in the 2016 elections.

She said with unity of purpose, members were focused to obtain that figure to help retain the Party in power.

Ms Mensah called on all Party members to work hard to help achieve that feat.