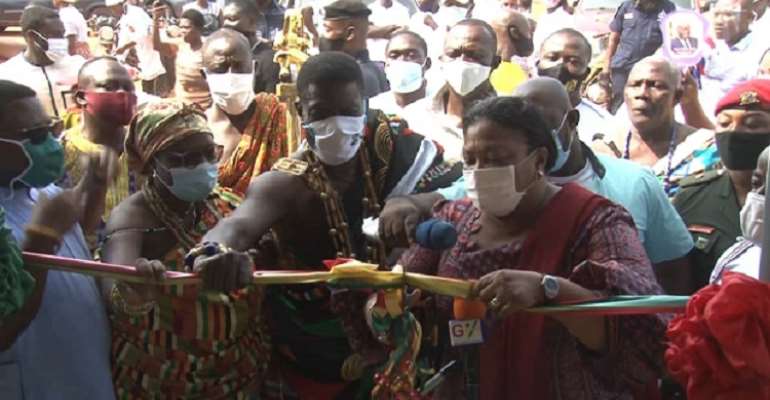 The acting President and Mankralo of the Ningo Traditional Area in the Greater Accra Region, Nene Kanor Atiapa II, has said the expeditious manner with which the Akufo-Addo administration is constructing a sea defence wall to protect his people shows that the President deserves to be given another term to continue his good works.

He said the President's wife, First Lady Rebecca Akufo-Addo, once visited them and they complained to her about sea erosion, and within a year she had been able to get her husband to commence a major sea defence project for them.

Nene Atiapa II made the revelation at Ningo when the First Lady visited the traditional area once again to make some donations towards this year's Homowo Festival.

As part of the visit, the First Lady cut the sod for the construction of a maternity ward, a school and also commissioned a market at Old Ningo.

Nene Atiapa II was full of praise for the President and said he deserved another term to continue his good works, adding that “if the mandate of the NPP is not renewed, the sea defence project will be abandoned.”

“Our town was being submerged by the sea, and she assured us of something drastic to save us when she visited us. True to her words, it is obvious now that a sea defence is being constructed quickly to protect us,” he indicated, adding “what can you do to someone who is trying to protect lives and property in your town.”

As the crowd cheered, Nene Atiapa II answered his own question saying “there is a slogan which goes like this: 4more! 4more! 4more!”

“In order to ensure that our towns and villages are safe and developed, everyone must ensure that the 4more comes to past,” he appealed.

Nene Atiapa II was excited about other projects the NPP government had done for the Ningo Traditional Area, saying “this government is extraordinary from successive governments in terms of development.”

“My people should not allow themselves to be influenced financially. We don't have to forget the work of this government and the First Lady. My people, let us appreciate what this government has done for us,” he concluded.

The items donated by the First Lady towards the Homowo included bags of maize, palm fruits, cartons of alcoholic and non-alcoholic beverages, boxes of bottled water and an undisclosed cash.

Alliance of CSO petitions Parliament for audience with GNPC ...
27 minutes ago