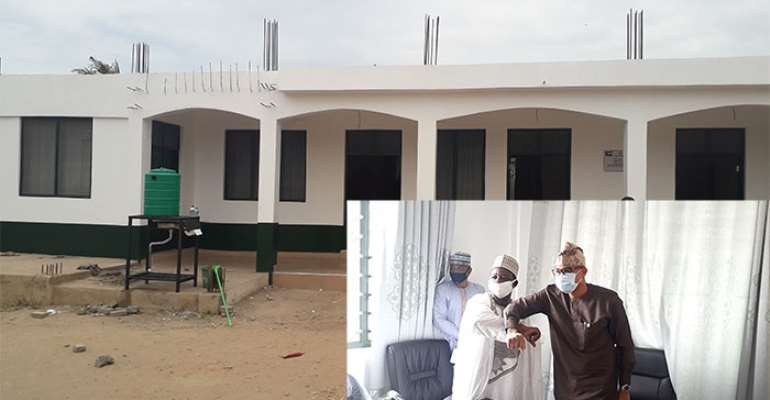 The minister (right) exchanging greetings with the chairman of the council, Alhaji Siddiq Gimala. INSET: A front view of the edifice

The Ministry of Inner Cities and Zongo Development has furnished the newly constructed office of the National Council of Zongo Chiefs in Accra.

The facility which was constructed by the Islamic Council for Development and Humanitarian Services (ICODEHS) was furnished upon a request from the council. The furnishing covers a conference hall and the reception area.

Also planned for the office are air-conditioners and fridges.

Speaking during the handing-over ceremony yesterday, the minister, Dr. Mustapha Abdul Hamid, described the Zongo chiefs as principal stakeholders of the ministry whose authority had been approved by God.

As customary landlords of any geographical area, the chiefs, he said, needed a point of contact that would make it easier for them to brainstorm and engage each other on issues relevant to the wellbeing of larger societies.

“Until this time, there was no place to find them unless we called them from their individual homes for meetings,” he said.

The decision to furnish the facility, he said, was to make both the work of Zongo chiefs and the ministry much easier as far as harnessing the “wisdom and intelligence” of chiefs towards achieving government's vision of building better zongo communities were concerned.

The public relations officer (PRO) of the council, Alhaji Baba Moro Issah, on his part, said the facility would serve as an information centre for the public as well as dealing with issues about women and children.

“Minister you have made history because this is the first time there is going to be an office for zongo chiefs and we will remember you, the ministry and your government for all that you have done,” he said.

He appealed for the posting of National Service and Nation Builders Corp (NABCO) personnel to the office so that they would deal with administrative matters of the office.

He further appealed for a vehicle to facilitate the mobility of the council in reaching out to other stakeholders and chiefs across the region.

Tunisians in largest rally against president's 'coup'
2 minutes ago