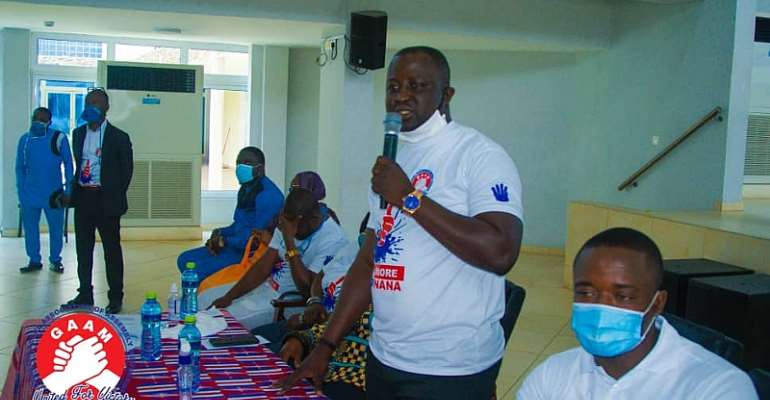 This came to light at a press conference in Accra on Tuesday, 25 August 2020, the group’s General Secretary, Paa Joe, said firstly, the President and his government have been able to increase the number of districts in the region from 16 to 29.

According to the group, President Akufo-Addo has reduced the size of the electoral areas.

Furthermore, the Assemblymembers said the government’s Free Senior High School programme has taken a lot of financial burden from them.

Also, they said graduates have now found jobs with the Nation Builders Corps (NaBCo) initiative, which has given the youth about 100,000 jobs.

Apart from NaBCo, the assemblymembers also say the Youth Employment Agency (YEA) has given opportunities to over 70,000 youth while the One District One Factory initiative, has also made it possible for the region to have more than 16 factories.

The Disability Fund, the assemblymembers also noted, has been increased, a situation that has eased the financial burden on People Living with Disabilities.

For all the above reasons, the assemblymembers says they will vote for President Akufo-Addo and the NPP in the 7 December 2020 polls.

“So, four more to do more for Nana Akufo-Addo”, the assemblymembers sang.

About a week ago, some other group of assemblymembers also endorsed former President John Dramani Mahama of the National Democratic Congress (NDC), who has promised to pay assemblymembers a monthly allowance, should he win the elections.

The group, calling itself Concerned Assembly Members Association of Ghana, CAMAG, which is made up of assembly members from various Electoral Areas across the country, said its members are ready and willing to vote for former President John Mahama in the 7 December 2020 polls so that he can fulfil his promise of paying assembly members.

At a press conference in Tamale, the group’s national coordinator David Atta Twum said the assemblymembers will vote based on policies, “especially those that will inure to their benefit”.

“So, let us not cloud ourselves with our political colours to destroy what will help us, let’s all endeavour to assess whatever promises that come with regard to our collective welfare”, he urged.

“We also call on all assembly members and well-meaning Ghanaians to support His Excellency John Dramani Mahama , the flag bearer of the National Democratic Congress, toward the welfare of assembly members, i.e., paying each assembly member a monthly allowance”, he told journalists.

“It’s not because we believe that NDC must come back to power again but we believe that the time has come for those who seek to govern us to consider the welfare of honourable assembly members and this we are ready to pursue to the last drop of our blood”, he explained.

“So, going forward into election 2020, if you have his Excellency John Dramani Mahama promising and not just promising but telling us how he’s going to make it possible to make sure that 28 years of our fourth republic, assembly members are considered in his next administration, then there’s a call for us to rise up, there’s a call for us to campaign from house to house, door to door, room to room, bed to bed, market to market to make sure that His Excellency John Dramani Mahama is elected as the president of the fourth republic of Ghana”, he added.

The group also expressed disappointment at some government officials who have described Mr Mahama’s promise as impossible.

“It’s obvious that you will hear from the other side, those who are supposed to know better, instead of them to give us policy directions, instead of them giving us alternatives for us, the assembly members, to consider whether what they are giving us is good or bad, they are rather downplaying this policy”, he observed.