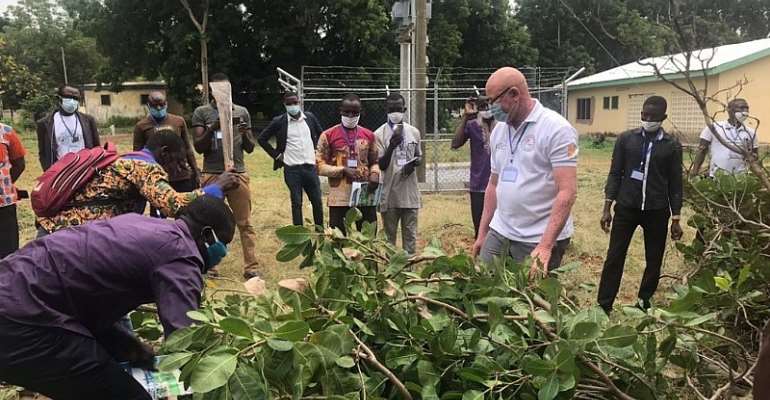 The Deutsche Gesellschaft für Internationale Zusammenarbeit (GIZ) GmbH held a 2-day training of Agricultural Extension Agents (AEAs) in the Upper West, Savannah and North East Regions of Ghana, on how to improve the productivity of unproductive and over-aged cashew plantations using a technique named “Topworking”.

The training was aimed at improving the capacities of the AEAs in line with the government’s Planting for Export and Rural Development (PERD) programme, with the goal to expand agroforestry, focusing on cashew production in the northwest zone of Ghana.

The training, which was organised by the Resilience Against Climate Change (EU REACH) project, with funding from the European Union (EU), provided a platform for 14 AEAs to build and enhance their capacities and knowledge levels on the technique of topworking unproductive and aged cashew plantations.

Eleven AEAs from all districts of the Upper West Region, one AEA each from Sawla-Tuna-Kalba and North Gonja both in the Savannah Region, and one from Mamprugu Moagduri in the North East Region benefitted from both the theoretical and practical sessions of the training workshop.

In his address at the opening of the workshop in Wa, Upper West Regional Director of the Department of Agriculture, Emmanuel Sasu Yeboah, noted that “…it is not necessarily the environment that is not conducive for cashew cultivation, we must use science and technology to make the cultivation of cashew work properly in the North Western part of the country”.

“I will urge our participants to apply the technical knowledge they will be acquiring from this workshop to make cashew very productive in this region. The region is not badly placed when it comes to the conditions for cashew production, if we apply all the knowledge we receive, within no time cashew production in the REACH operational areas and the region at large will boom” he said.

The training is in two phases: Phase One had participants going through criteria for selecting unproductive trees, cutting of selected trees or stumping, painting of the cut surface, covering the stump with leaves and branches to facilitate the initiation of new shoots and the removal of cover and monitoring of shoot development. Phase two will be held in October and will have participants observe shoot development and subsequently graft unto successful shoots identified using the usual cashew grafting procedure or protocol.

The principle of topworking is the replacement of the crown of an underperforming tree, by grafting scions with desirable characteristics from ‘elite mother trees’ on them, with the purpose of improving the productivity of the tree by taking advantage of its well-developed root system.

Top working ultimately provides such advantages as rapid growth (with new multiplications), a quick return on investment as production can start the same year, and improvement of yields of trees, which before topworking, had low or no productivity.