Pulbaa In The Daffiama Bussie Issa District: NCCE Urges Residents To Be Conscious Of Development Interventions 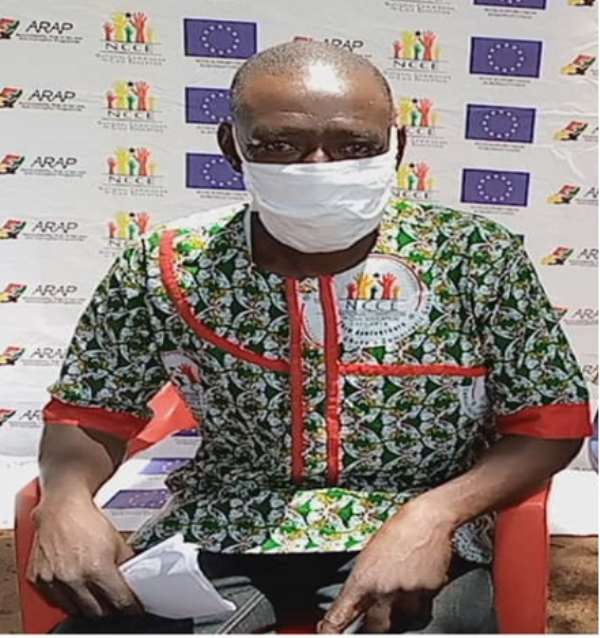 The Daffiama Bussie Issa District Directorate of the National Commission for Civic Education (NCCE) has admonished the good people of Pulbaa community to be very much concerned with development intervention in the locality.

This called was made by the directorate that, during the commissions, social accountability program dubbed ARAP which is supported by the European Union. Speaker after speaker reiterated the call for residents to prioritize the need to critically get involved in any development programme that is been executed by the government or any other partner.

The Daffiama Bussie Issa District Director of NCCE Mr. Abdul Rahaman Osman outlined the objectives of the programme to included; awakening residents to ensure the quality of work and service rendered to them. To empower residents to accept ownership of programme by activity involved in interventions and to ensure that development interventions initiatives demand is been formalize by set up committees.

He concluded by urging the people to be ambassadors of demanding, supervision and be vigilant to ensure value for money contract projects or service is delivered to them.

On the part of the Upper West Regional Deputy Director of NCCE Mr. Yibile John, he underscored the importance of decentralization and accountability.

He intermitted that decentralisation is to bring governance on the doorstep of local people to quicken development interventions and tailored demand of rural communities through participatory democracy.

It is important for local communities not to stand aloof, rather get involved in ensuring their development interventions projects are not compromised, he added.

He lamented that corruption has engulfed the fundamental principles; rural of law thereby undermining equality before the law and stampeding the human rights and liabilities. To help address these concerns, communities need to be empowered and so the NCCE that has been a principal advocate for development is charging them (communities) to be more concerned in demanding development interventions.

A resource person for the programme Tahiru Lukman, who is the Chief Executive Officer of Ideapath Consult and a seasoned development Consultant took participants through needs the process of needs assessment. After brainstorming, presentations and discussions on the felt needs of the people, it was concluded that the need to improve upon basic school educational infrastructure, water resources dam and borehole, and provision of feeder road was the three most pressing needs of the community. This was preceded with the setting up of a five-member committee including the assemblyman of Fian electoral area, the queen mother of Pulbaa community and the Unit Committee Chairman.

Mr. Ceasar Anicestu Eneebo who is the Daffiama Bussie Issa District Director of the Department of Community Development and Social Welfare added that socio-economic development is key in alleviating poverty and for that matter communities must get involved in their development process.

He explained the mandate of the department of community development and social welfare to included; profiling of communities' needs and support in identify and capturing pro-poor people into government social intervention programs.

He urged the beneficiary to be regular in taking their benefits to avoid a situation of been deleted. He also, hinted that there would be an expansion of beneficiary to the programme and more vulnerable people could be added and Pulbaa will be a beneficiary.

The programme ended with the session of an open forum where participants gave suggestions and contributions as well as other questioning organisations for clarifications where necessary. The programme which was held at the community meetings grounds on the 23rd August 2020 started at exactly 10: 15amended at one 1: 24pm. Other members in attendance were Mr. Shaibu Umar and Madam Esther Tagtir both from the Upper West Regional Directorate of NCCE.