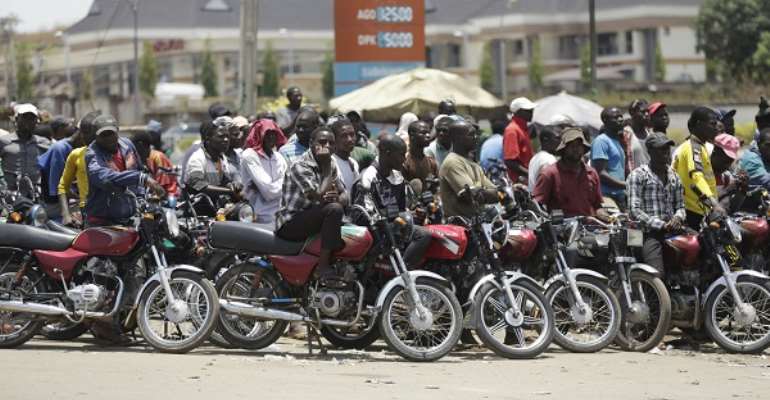 So it was on 8th November 2018. I had to journey to Tamale that evening for my graduation which was scheduled on 10th November. The reason is that we were told not absent ourselves from the rehearsal so I needed to be there the next day. I couldn't buy a ticket and so my line manager called someone at the O.A Bus station to get me one.

I left office earlier than the closing time. Rushed to Madina to pick up my Luggage. I got home at around 7 pm. Then I got a call that the bus is about leaving, so, I should be there immediately. Wow! The distance and traffic 🚥 at that time. What do i do? I quizzed myself.

As confused as i was, trying to figure a way out, just so I wouldn't miss my bus. Picking a trosky or taxi or Uber was just not the way.

On reaching the Madina police station, I sighted this 'Okada' rider.

Unfortunately, we got arrested at the Nima police station. The crime being I didn't have a helmet on. But the driver had his own. They questioned him why he didn't have one for me. I stood there even more confused 😕. I had to intervene. The policeman asked me to leave immediately so that I wouldn't miss my bus. When I insisted that he should forgive the driver, he asked the driver to pay 50gh instead of 100gh.

So, I paid the driver his money and left them both. Quickly, I had another one. And for him, we both had our helmets on and safely we got to the station and in less than 5minutes, the bus took off. I joined the rehearsal the next morning successfully.

There are so many of such instances where people depend on 'okada' to meet urgent needs.

Similarly, it was the last day of one of my beloved superior at Vodafone. He narrated an ordeal of how he nearly missed out on the interview that landed him that role at Vodafone.

So, he was at Spintex around 18 junction. Then came the call for him to attend the interview in a short while. You can imagine the traffic on that road (Spintex) to airport city. He had to park his car and boarded an 'okada' and got there right on time, and that gave him that befitting job.

Basically, what this story seeks to spell out is that the "okada" business is in full operation even though it isn't legal. It's not the case that someone is now going to start it and even create employment out of it. It's the source of livelihood for many youths out there. You may denigrate it and or perceive it as dangerous, but its positive impact far outweighs the negatives.

It's needless to compare 'Okada' to Nabco for political expediency!

It's dishonest to try to twist it's(okada) legalization to mean creation of employment through it. Until decent jobs are provided for those youths who are engaged in that sector, and subsequently, ban the business(if you think it's bad) entirely, I don't see anything wrong with the decision to legalize and regulate it.

Let's respect the source of livelihood of all, rather than allow political lens, thwart our conscience.