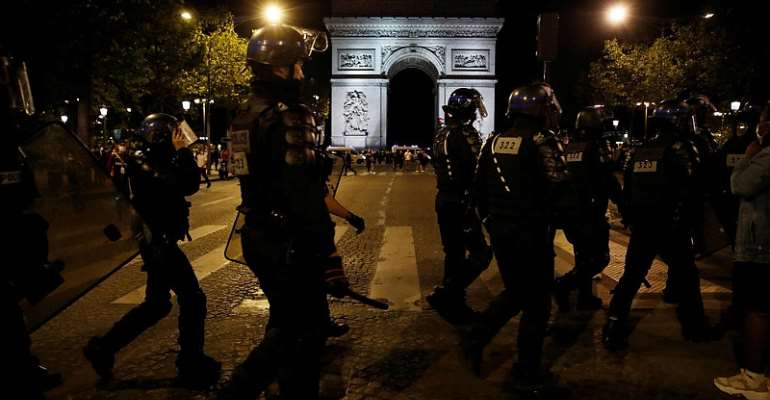 Fifteen people have appeared in court in Paris accused of theft, vandalism and violence during clashes which followed Paris Saint-Germain's loss to Bayern Munich in Sunday night's Champions League final. A further 80 people are being investigated for their involvement in the looting of luxury shops in the French capital.

French authorities are picking up the pieces after yet more scenes of chaos on the Champs-Elysées as gangs went on a rampage following the defeat of Paris Saint-Germain to Bayern Munich in the final of the Champions League on Sunday night.

Fifteen people appeared in a Paris court on Tuesday, arrested for violence, theft and vandalism, while two investigations are underway into the looting of luxury shops.

Dozens more people have been remanded in custody.

France's Interior Minister Gérald Darmanin said those responsible were "thugs who have nothing in common with real supporters".

"These are unacceptable acts," he said, adding that 16 police officers had been injured in the clashes, 12 shops had been damaged and 15 cars set on fire.

Police also fined over 400 people for not wearing a mask, as per the new restrictions in place for public spaces in a bid to curb the spread of the coronavirus.

Security forces were on high alert throughout Sunday night, as hundreds of people gathered on the world-famous avenue which had been closed off to traffic to allow space for pedestrians.

The atmosphere quickly soured when PSG lost to Bayern Munich 1-0, at a closed door match in Lisbon.

French riot police (CRS) were forced to use tear gas to evacuate the Champs Elysées, Trocadéro and the PSG stadium Parc des Princes after the match.

Witnesses said flares and fireworks were thrown at the police and several cars were set on fire.

Out of the 158 people arrested on Sunday evening, 24 of them remain in custody, some were referred to a district attorney and around 40 were let off with a warning.

Forty-nine of the arrested were minors and will appear in a juvenile court in their department of residence.

The Paris court has also launched two inquiries into looting, the first involving jewellery store Christofle, on rue François 1er, where authorities said windows had been smashed and 50,000 euros worth of merchandise had been stolen.

The second inquiry concerns the nearby Nina Ricci store, on avenue Montaigne, where items such as a computer, cash box, clothing and perfume worth 150,000 euros were taken.

Around 80 people are believed to be involved in the two robberies.

Police presence had been increased in and around the Champs-Elysées in anticipation of violent scenes mirroring the chaos of last Tuesday's match, in which PSG won the semi-final against Leipzig.

Chereponi: 12 arrested after vandalising properties over nom...
11 minutes ago