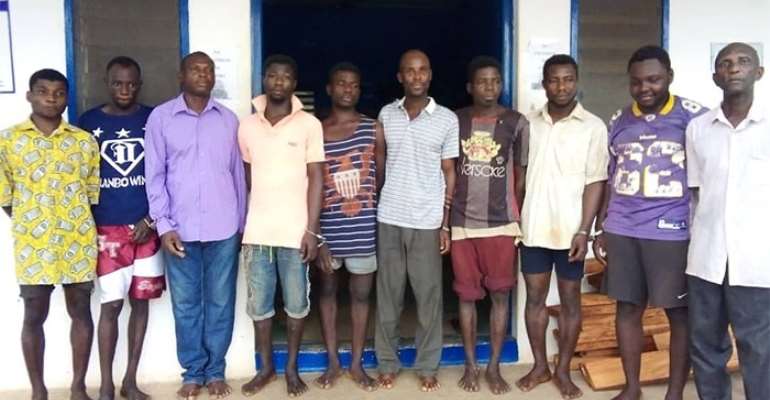 Some 10 cattle thieves in the Volta region are in trouble.

The 10 suspected thieves allegedly conspired with five others and stole 25 cattle from two herdsmen at Abutia-Kissiflui.

They have since been remanded into Police custody by the Dzolokpuita magistrate court presided over by John Sam.

The Public Relations Officer of the Volta Police Command, Corporal Prince Dogbatse who revealed this to the media narrated that on July 29, 2020, Police had information that two herdsmen were attacked at Abutia-Kissiflui.

The two managed to escape, leaving behind the herd of cattle they were tending. However, when the coast went clear, they returned to the scene only to realise that 25 of the cattle had disappeared.

The Police in the Ho West District was alerted. Investigation into the incident began. In the process, the victims were able to identify some of the suspects to assist Police work.

An attempt to arrest the suspects led to a face-off with the Police personnel. The suspects who fiercely resisted arrest, also caused damage to the Anyirawase District Police vehicle.

One of the suspects, Robert Akpabli who was handcuffed managed to escape with the aid of an angry mob.

To avoid a clash with the mob and other innocent residents, the Police retreated and re-engaged at another time.

On August 18, 2020, the Anyirawase Police with the support of the Regional SWAT team conducted a swoop that led to the arrest of 10 suspects including Robert Akpabli, age 29, a farmer to assist investigation.

The following day, August 19, 2020, the 10 suspects were arraigned before the Dzolokpuita Magistrate and were remanded to reappear on 28 August, 2020.

Investigation into the incident also recovered the pair of handcuffs, which were now damaged and one of the stolen cattle tied in the house of one of the suspects.

Investigation is still ongoing to recover the rest of the cattle.