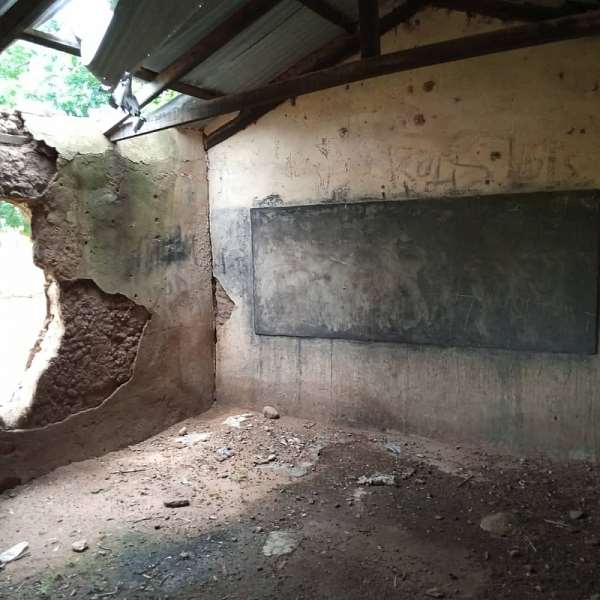 The melting Zuabuliga primary school is gradually sinking to the ground, taking away the pride of education from children in the community who appear to see no hope in going to school. The school, aside from its gradual demise, lacks almost everything including desks, textbooks, teachers and even chalk.

The Zuabuliga primary school, is the only school located in the Pusiga District of the Upper East Region. It was built in 1995 by community members with mud. After 25 years, it has seen no significant renovation and is currently in a deplorable state begging to collapse. Schools are about to resume from the covid-19 break and already school kids in this particular community are discouraged and do not find it pleasant and exciting to return to the death trap as the school has become a habitat for goats, weeds, lizards, snakes and other dangerous reptiles.

For them, education is a war and deadly struggle as they cannot predict when the entire building will finally yield to the ground.

The Zuabuliga Young Eagles Movement group is appealing to government and the Ghana Education Service (GES) to as a matter of urgency help construct a six-unit classroom block to serve the Zuabuliga community.

Speaking to Modernghana News on the state of the school, Daniel Abugri who is a member of the Zuabuliga Young Eagles Movement group revealed how the situation is hampering education in the community.

“Sometimes when it threatens to rain [before Covid-19 forced the closure of schools], teachers have no option than to close down the school for the fear that it might collapse on the innocent school children. The mud is weak and the roof is ripped off. Windows at all ends removed and moulds are seen springing up in the classrooms”, Mr Abugri noted.

According to him, there have been several letters written to the Assemblyman of the area Mamudu Awande, the District Chief Executive (DCE) Zubeiru Abdullai, and the Member of Parliament (MP) for the Pusiga Constituency Hon. Hajia Laadi Ayamba but to no avail.

“We have written several letters and made appeals to the DCE, our MP but nothing is really happening”, Daniel Abugri noted with grief.

The Zuabuliga Young Eagles movement group is, therefore, appealing to those in authority through the media to come to their aid. They want the government and GES to build a new school to save education in the community. “….my plea to Government is that they should help fix the problem by constructing a six-unit classroom block”, Daniel Abugri shared.

He added, “The community is also making a passionate appeal to the government to continue with the abandoned rural electrification project which was started in 2016”.