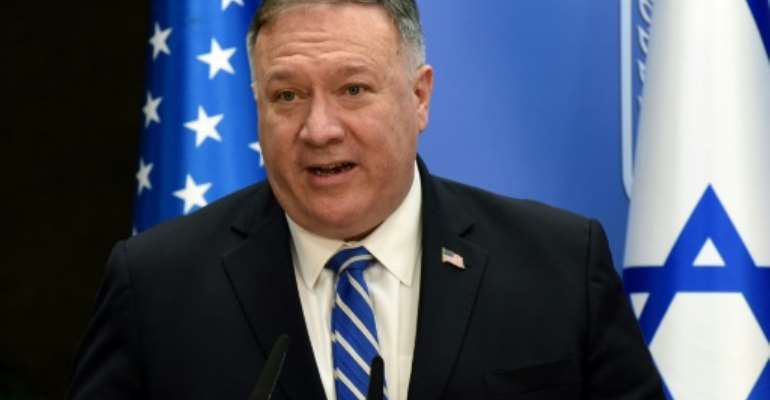 US Secretary of State Mike Pompeo is on a five-day tour with stops in Israel, Sudan, Bahrain and the United Arab Emirates, focusing on Israel's normalisation of ties with the UAE and pushing other Arab states to follow suit. By DEBBIE HILL (POOL/AFP)

Pompeo, the first American top diplomat to visit Sudan since 2005, arrived on a historic "first official non-stop flight" from Tel Aviv, he tweeted from the plane.

Israel remains technically at war and has no formal diplomatic relations with Sudan, which for years supported hardline Islamist forces under its former strongman Omar al-Bashir.

But its new transitional government has vowed to break with the Bashir era following his ouster last year amid popular pro-democracy protests.

Sudan, which has launched sweeping social and political reforms, now hopes Washington will soon take it off its blacklist of state sponsors of terrorism as it seeks to fully re-integrate into the international community.

Closer ties with US ally Israel would help, and both sides have already taken a series of steps, muddied however by mixed messaging from Sudan.

Israeli Prime Minister Benjamin Netanyahu met Burhan in Uganda in February and later announced that the two leaders had agreed to cooperate towards normalising ties.

Sudan's cabinet later denied that Burhan had made such a promise, which remains highly controversial in much of the Arab world.

More recently, Sudan's foreign ministry spokesman Haider Badawi said he was in favour of such an accord, but foreign minister Omar Gamaledinne then said the issue had "never been discussed by the Sudanese government" and promptly fired the spokesman.

The coalition of parties and civil society groups which led the protest movement, the Forces of Freedom and Change, argued Tuesday that the government has "no mandate" to normalise ties with Israel, pointing to "the right of Palestinians to their land and to a free and dignified life".

Pompeo was to meet Sudanese Prime Minister Abdalla Hamdok to discuss US support for his civilian-led transitional government and 'for deepening the Sudan-Israel relationship', said the State Department. By ASHRAF SHAZLY (AFP/File)

Pompeo's regional trip, also taking in Bahrain and the UAE, comes in the wake of the landmark August 13 announcement of a normalisation of relations between the Emirates and the Jewish state.

Speaking in Jerusalem on Monday, both Pompeo and Netanyahu said that they were hopeful that other Arab states would follow suit -- in part to boost an alliance against their common arch foe Iran.

Sudan has been under US sanctions for decades because of the presence of Islamists, including Osama bin Laden, who lived there for years in the 1990s before heading to Afghanistan.

While the US lifted a 20-year trade embargo against Sudan in October 2017, it kept the country on its list of state sponsors of terrorism, and Khartoum has been lobbying hard to have that designation lifted.

Sudan has been in talks on compensating victims of Bashir-era Al-Qaeda attacks, including the 2000 USS Cole bombing in Yemen and the simultaneous 1998 bombings of the US embassies in Kenya and Tanzania.

Since January Washington has upgraded its diplomatic representation in Khartoum from the level of charge d'affaires to posting an ambassador.

The Pompeo visit comes as Sudan is in deep economic crisis -- having suffered decades-long US sanctions and the 2011 secession of the country's oil-rich south.

Grappling with high inflation and the coronavirus pandemic, the country badly needs to attract more foreign aid and investment

"They are extremely keen to have US sanctions lifted and they are under heavy UAE influence," said Cinzia Bianco, a research fellow at the European Council on Foreign Relations.

While Bashir is on trial over the Islamist-backed coup that brought him to power over three decades ago, the new transitional government in Khartoum is at pains to distance itself from his legacy.

It has agreed in principle to hand Bashir over to the International Criminal Court in The Hague for his role in the Darfur conflict on charges of genocide, war crimes and crimes against humanity.

Conflict broke out in the Darfur region in 2003 when ethnic minority rebels staged an uprising against the government, citing marginalisation and discrimination.

Hamdok has made finding a peace deal with rebel groups a priority, in order to bring stability to restive regions that also include Blue Nile and South Kordofan.