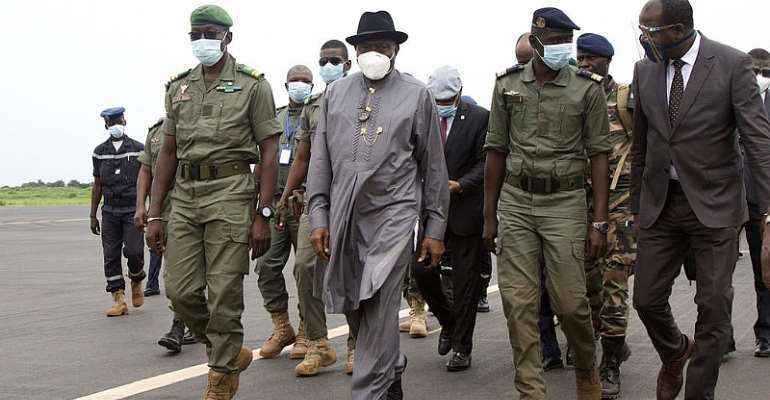 Mali's ruling military junta has denied that it wanted to put in place a three-year transitional authority led by soldiers, following the overthrow of President Ibrahim Boubacar Keita, ousted last week by the National Committee for the Salvation of the People (CNSP).

“At no time have we talked about a government mostly consisting of the military,” CNSP spokesman Ismael Wague told journalists in Bamako.

Soldiers calling themselves the CNSP last week mutinied at the Kati military base outside of Bamako and arrested President Keita, with Colonel Assimi Goita declaring himself the head of the junta.

Wague said that all decisions about the transition, a new president and formation of government would be made between “Malians and the political parties, the unions, signatory armed groups [to the 2015 peace agreement] and civil society”.

“Nothing has been decided,” the junta's spokesman said, describing how he was surprised to learn about media reports discussing the format of any transition in Mali.

“This should not be headed by the military. The military should return to the barracks as they have initially promised,” said Ibrahim Nyei, a researcher at the School of Oriental and African Studies in London. “It will be frightening deja vu to have a military government in West Africa.”

Wague told France 24 last Thursday that the soldiers acted to stop the suffering of Malians, fix problems within the army, stop corruption and help a country that was stuck at a standstill. He said previously that the transition would be led by the military or a civilian and be as short as possible. Reports about the junta wanting to establish an authority led by a soldier acting as head of state, presiding over a three-year transition period emerged on Sunday following discussions between the CNSP and a mediation team from the Ecowas regional bloc.

“A three-year transition seems like a very long time, I was expecting a matter of months, a year at most, but on the other hand I was glad that it wasn't one of these rush transitions,” Bruce Whitehouse, a Mali expert at Lehigh University, told RFI.

Susanna Wing, who researches Mali at Haverford College shares concerns about a rushed transition or extended military rule. “I think there's probably a balance in there,” she said, pointing out that badly organised elections led to the situation with a coup d'etat in the first place.

The government would be mostly made up of soldiers, reported Bamako correspondent Serge Daniel, who cited a source within the mediation team from the Ecowas regional bloc and an official within the military junta.

In the aftermath of Keita's arrest, West African leaders demanded the ex-president be returned to power, denying legitimacy to the coup plotters. Niger's President Mahamadou Issoufou, acting president of the Ecowas regional bloc, said “the time for taking power by force is over”.

“The reality is that President Keita has lost legitimacy, he has no mandate,” said analyst Nyei, who monitored Mali's 2013 elections following the last coup d'etat. “Returning him to power under these circumstances will only inflame the situation further.”

“What Malians are saying is, we want to work this out among ourselves on our own timeline, and I think eventually Ecowas is going to have to recognise that and realise that they don't have a whole load of leverage over that process,” said Whitehouse, speaking from Pennsylvania.

Mediation led by Nigeria's ex-president Goodluck Jonathan on behalf of Ecowas continued into a third day on Monday in the capital Bamako.

“Keita said he has resigned, he was not forced to resign, but he has resigned and he is not interested in governance again,” said Jonathan, who led mediation efforts between the government and opposition protest movement before the 18 August coup d'etat.

“What issues we discussed with the military – the political detainees, how are they going to manage them,” said Jonathan, outlining concerns about the security of certain personalities given the strength of feeling about recent events in the country.

Jonathan said on Sunday that Ecowas and the coup leaders had “reached a number of agreements” but not an understanding “in all the issues”, without referring to anything specific.

Besides further meetings with the CNSP, the Ecowas mediation team on Monday also met members of Mali's constitutional court. Nine new members were sworn-in on 10 August as part of a plan put together by Ecowas to help solve the country's political crisis.

The constitutional court was at the epicentre of a crisis following its dismissal of 30 MPs elected as part of legislative polls in March and April. Striking off MPs who had won certain constituencies was one of the main reasons for the beginning of a protest movement calling for IBK to step down.

“I think it would be dangerous for Mali to lean too heavily on a structure like the constitutional court at this time that has been newly reformulated in these circumstances because there's so much suspicion towards the political class and the elites,” said Mali analyst Wing.

IBK's resignation following his arrest fulfilled a key demand of the opposition M5-RFP group, the 5 June Movement – Rally of Patriotic Forces, a coalition of civil society and opposition groups, who have led mass demonstrations.

Ex-president Keita's removal was initially welcomed by many Malians and victory rallies were held in the capital Bamako to celebrate. Public support for ousting IBK is illustrated by a survey conducted by Sidiki Guindo, the head of GISSE, a polling organisation.

More than 81 percent of Malians do not support the calls by Ecowas for the military junta to step aside and have Keita restored to the presidency, while almost 60 percent of people do not see the military takeover as a coup d'etat, according to GISSE's survey of 925 people in Bamako published on Monday.

“It's important to reiterate how many Malians were supporting this coup, they wanted IBK out of there,” said Wing, who has studied Mali for several years.

She recalled the 1991 overthrow of military leader Moussa Traoré and the 2012 coup led by Captain Amadou Sanogo.

“Their experience from 1991 was not a three-year transition. It was a national conference in 1991 and elections by January of 1992. It was brief – and that was considered much more successful than the 2012 coup, which was a disaster,” she said.

French President Emmanuel Macron had initially condemned the coup and said he wanted the quickest possible transition to civilian rule. France's Defence Minister Florence Parly also said last week military operations in the country would continue as part of Operation Barkhane, regardless of the coup d'etat.

“France has seen to be somewhat flexible towards this new order emerging in Bamako,” said Sahel watcher Whitehouse, noting that Macron never explicitly called for the reinstatement of ex-President Keita.