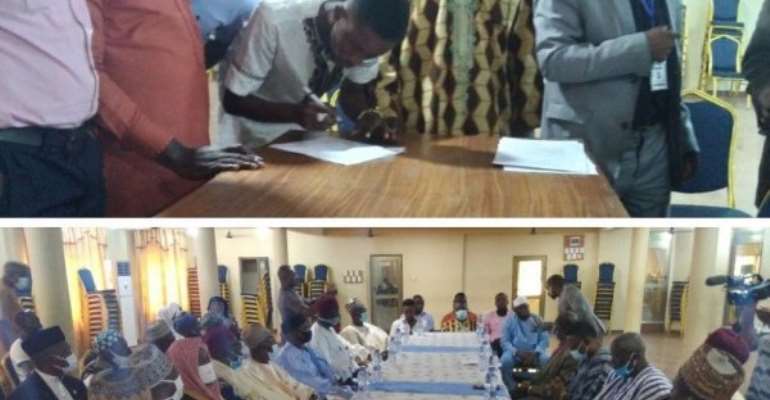 The governing New Patriotic Party (NPP) and the opposition National Democratic Congress (NDC) in the Asawase Constituency have signed a Memorandum of Understanding (MOU) to ensure peace ahead of the 2020 general elections.

Two constituency executives each from both parties signed the document after a mediation process led by the National Peace Council (NPC) to diffuse the seeming tension in the constituency between the two parties.

While the NPP signed after more than three hours deliberations, the NDC initially refused to sign, citing bias on the part of the Police and the Electoral Commission (EC) in the just ended voter registration exercise.

It took extensive engagement by the NPC team led by its Chairman, Prof. Emmanuel Asante to make the NDC delegation to rescind their decision.

They, however, signed on condition that they would exercise their right to self-defence if they come under attack.

Mr Mugis Mahdi, the Constituency Secretary of the NDC, said the party could not trust the Police to protect them, considering events during the registration exercise.

He said there were instances where the Police looked on helplessly when NDC members came under attack.

He said, "some of these things informed our reluctance in signing the MOU but we don't want to create the impression that we are not committed to peace and that is why we have signed."

Prof. Asante commended the leadership of both parties for the commitment to a peaceful election and urged them to engage their members to allow peace to prevail in the constituency.

He said the parties should desist from using internal party security to protect political leaders during electoral activities.

They should allow state security to perform their lawful mandate, he said.

"We have agreed that at some point in October we shall bring together the two candidates, Mr Mohammed Muntaka Mubarak and Mr Alidu Seidu so that they would make a public demonstration that they are for peace for their followers to emulate," he said.

The meeting was also attended by other stakeholders including the Regional Chief Imam, Sheikh Abdul-Mumin Harun and representatives from the Council of Zongo Chiefs who took turns to add their voices to the need for a peaceful election.