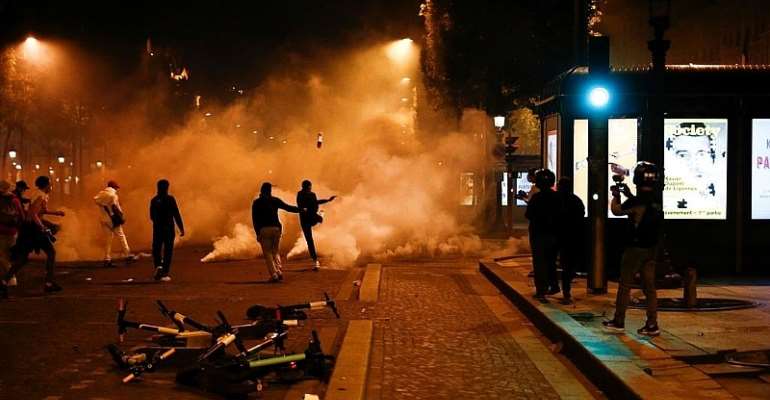 Speaking in the wake of clashes between police and supporters of the Paris St Germain football team in the French capital on Sunday night, Interior Minister Gérald Darmanin said he intended to further reinforce police action, notably with the use of drones, against criminals who profit from large demonstrations to pillage luxury shops and parked cars.

Sunday night's clashes in the centre of Paris led to 158 arrests. Minister Darmanin said the people responsible for the violence were "thugs who have nothing in common with real supporters".

Congratulating the police for their handling of the Sunday night street fights, the interior minister promised to reinforce the arsenal of deterrents at the disposal of the forces of law and order.

"We will continue this work," the minister said, "so that we can finally put an end to this, get rid of these people who come to break windows and rob, who arrive knowingly to have a go at the police."

Among the elements being considered, the minister added, is the use of drones, already available to the Paris police, to identify those persons who repeatedly show up on the margins of major demonstrations.

The Interior Minister has already asked for the necessary judicial adjustments to be made to allow drone-collected evidence to be used in French courts.

The Paris police chief, Didier Lallement, has meanwhile banned all group activities associated with the return of the defeated Parisians to the French capital.

The PSG players returned to their home ground at the Parc des Princes, where they were joined by members of their families.

All public demonstrations of support have been banned from 14.30 on Monday until 6AM on Tuesday. Bars, restaurants and shops selling alcohol in the area around the stadium have also been ordered to remain closed until Tuesday morning.

A welcome for the team, planned by hardcore supporters of the Paris Ultras Collective, was cancelled at the last moment. The area around the stadium has been described as "calm", with a major police presence.