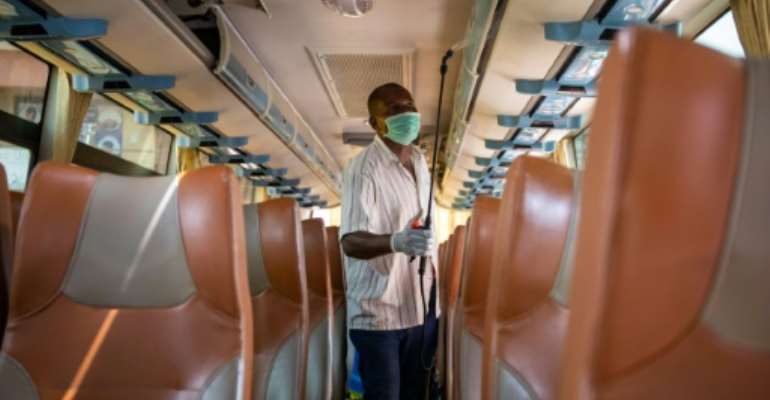 Uganda is battling to get citizens to comply with measures to curb the virus, with many new infections from public transport. By Badru KATUMBA (AFP/File)

Rwanda and Uganda, which had put in place some of the earliest and strictest lockdowns in Africa, have hit record numbers of daily coronavirus cases, prompting authorities to threaten a return of harsh measures.

Rwanda on Sunday announced a record 200 cases in a single day, and has recorded almost a third of its 3,089 cases in the past two weeks.

Uganda on Saturday hit a record 318 cases in a day, more than half of them from a cluster in a prison in the northern Amuru district, which amounts to 13 percent of its total 2,362 cases.

Both countries took drastic measures restricting movement in March when they had only a handful of cases, and have since seen only a trickle of infections.

Authorities have blamed the spike on complacency, and fatigue with social distancing measures.

"A large number of new COVID-19 patients in the country are infected in public places and in markets and shops. Those are the main places where people take off their masks or wear them badly," Rwanda's health ministry said in a statement on Sunday.

Rwanda -- which suspended all public transport, shut borders and businesses and asked people to remain indoors -- lifted its lockdown in May. A curfew from 9:00 pm to 5:00 am remains in place.

However shortly after re-opening, cases began to rise, prompting authorities to impose targeted measures on affected districts and villages.

Last week, Kigali authorities shut two crowded markets after tests showed that over 100 traders and their contacts had contracted the virus.

Rwandan Health Minister Daniel Ngamije told state television last week that a second lockdown was not out of the question, even though "it is difficult" to impose it.

"People must understand that if cases of coronavirus continue to escalate, difficult decisions will have to be made," he said.

Government has also said it will review plans to re-open schools in September.

Rwanda has deployed police officers to arrest individuals who are not social distancing or not wearing masks, and sends offenders to all-night lectures on the dangers of the coronavirus.

Uganda has slowly eased its lockdown measures in recent months, with some sectors of the economy and schools still closed.

Betty Olive Kamya, a member of the national taskforce on COVID-19, told AFP the country was battling to get citizens to comply with measures to curb the virus, with most new infections from public transport or political rallies.

"Unless people change the way they conduct themselves and observe the guidelines on COVID-19, we may experience another lockdown and soon," she said.

"The president will be making an announcement on the way forward on whether to have another lockdown or not by end of this week."

As in much of the region, the death rate in both countries remains relatively low. Rwanda has recorded 12 deaths and Uganda 22.