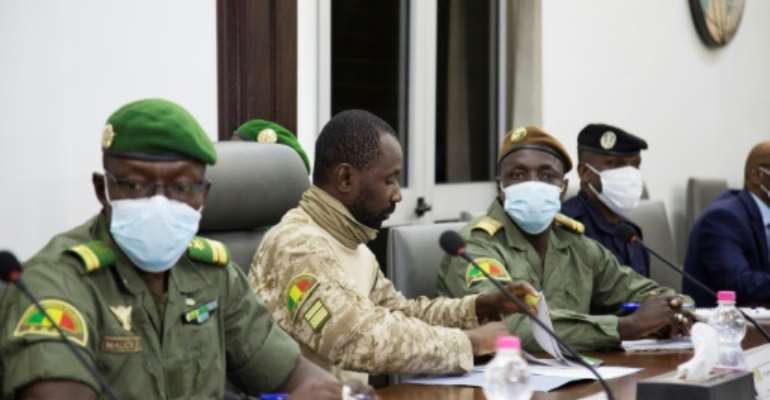 Talks: The junta, which calls itself the National Committee for the Salvation of the People, is headed by Col. Assimi Goita, centre. By ANNIE RISEMBERG (AFP)

West African envoys resumed talks with Mali's new military rulers on Monday as the junta denied it had decided on a three-year blueprint for restoring civilian rule.

Colonel Ismael Wague, spokesman for the rebel officers who seized power last Tuesday, insisted that the transition remained undecided as the third day of talks with the regional bloc ECOWAS got underway.

"I want to make clear at this stage of discussions with the ECOWAS mediation team that nothing has been decided," he said at the defence ministry in Bamako.

"At no point have we talked about military-majority government," he said.

"Any decision relating to the scale of the transition, the transition president, the formation of the government will be done among Malians" and be followed by "mass consultation," he said.

Keita appeared on national TV in the early hours of Wednesday, saying he had no choice other than to quit. By - (ORTM/AFP)

The coup sent shockwaves among Mali's neighbours, which fear that the country -- already beset by a jihadist insurgency and moribund economy -- could spiral into chaos.

A source in the visiting delegation on Sunday said the junta "has affirmed that it wants a three-year transition to review the foundations of the Malian state. This transition will be directed by a body led by a soldier, who will also be head of state.

"The government will also be predominantly composed of soldiers" under the proposal, the source said on condition of anonymity.

Additionally, a junta official confirmed to AFP that "the three-year transition would have a military president and a government mostly composed of soldiers."

This timeframe contrasts with the junta's vow, within hours of taking over on August 18, that elections would be held within a "reasonable" timeframe.

Many Malians took to social media on Monday to attack the transition scheme.

The ECOWAS delegation is being led by former Nigerian president Goodluck Jonathan, second from left. By ANNIE RISEMBERG (AFP)

It also compares starkly with demands by the 15-nation ECOWAS -- the Economic Community of West African States -- for the "immediate return of constitutional order."

The bloc's leaders are to confer in a virtual summit on Wednesday as to how to proceed, mindful of Mali's last coup in 2012, which led to a regional revolt that metastasised into a jihadist insurgency.

They have already decided to close Mali's borders and issued threats to impose sanctions against the coup leaders.

The bloc has already intervened in several crises in West Africa, including The Gambia, Liberia and Sierra Leone.

Keita was elected in 2013 after running a campaign in which he pitched himself as a unifying force in a fractured country.

He was re-elected for a second term in 2018 but failed to make headway against the jihadists, and the ethnic unrest they ignited in the centre of the country further damaged an already sickly economy.

An outcry over the results of long-delayed legislative elections in April cemented his unpopular reputation, and in June a protest movement was born aimed at forcing him to resign.

ECOWAS has stood by Keita and called for him to be restored to office, although this demand has been eclipsed since the start of the talks by the issue of his detention.

The ECOWAS and junta sources said on Monday that Mali's new rulers had agreed to free the ousted president and that he would be able to return to his home in Bamako.

The coup leaders say they are holding 17 leaders at a barracks about 15 kilometres (nine miles) from the city after releasing two others last week.