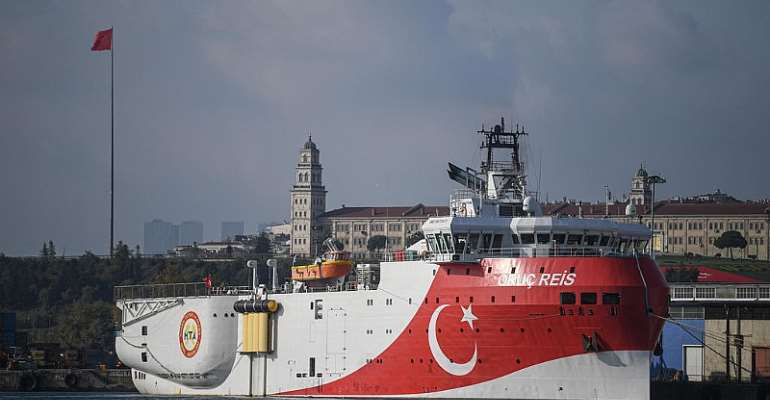 Turkish authorities have said that the Oruc Reis exploration vessel will carry out seismic surveys in a disputed part of the eastern Mediterranean until 27 August, in a move likely to increase already simmering tensions in the region.

Turkey and Greece, both Nato members, disagree sharply over rights to hydrocarbon resources in the eastern Mediterranean. Ankara and Athens can't see eye to eye over the extent of their continental shelves in waters dotted with islands, most of them Greek.

Earlier this month, Turkey said the Oruc Reis would conduct seismic exploration until 23 August in waters claimed by Greece, Cyprus and Turkey. Athens has called the survey “illegal”.

The ships and jets arrived in Crete and carried out joint manoeuvres with Greek forces, acording to defence sources in Athens.

On Sunday, the Turkish navy issued a “navigational telex” (“navtex”) saying that the work of the Oruc Reis and two other vessels, the offshore supply ship Ataman and the tug supply vessel Cengiz Han, would continue until 27 August.

Currently the three ships are operating about 200 km south of Turkey, in a stretch of Mediterranean between Cyprus and the Greek island of Crete.

Seismic surveys are part of preparatory work for potential hydrocarbon exploration. Turkey and Greece are also at odds over issues such as flight paths over the Aegean Sea and the ethnically divided island of Cyprus, where the Turkish Republic of Northern Cyprus is controlled by Ankara, while the Republic of Cyprus is a full-fledged member of the European Union.

Last Friday, President Tayyip Erdogan announced the discovery of a 320 billion cubic meter gas field in the Black Sea, the largest such find in Turkish history.

Ankara hopes to start exploiting the gas by 2023, when Turkey will mark the centenary of the founding of the republic, Erdogan said.

“Turkey has realised the greatest natural gas discovery in its history,” he said. “We are determined to solve our energy issue. We will not stop until we become a net exporter of energy.”

Berat Albayrak, the economy minister and Erdogan's son-in-law, said the government hopes profits from the sale of gas will wipe out Turkey's current account deficit.

But while the find is significant, it is smaller than other discoveries in the nearby eastern Mediterranean. The Black Sea discovery is about a third of Egypt's Zohr field, one of the largest ever found in the Mediterranean, which is estimated to hold 850 billion cubic meters, nearly three times the Turkish find.