Who Said Rawlings Does Not Deserve His Comeuppance? 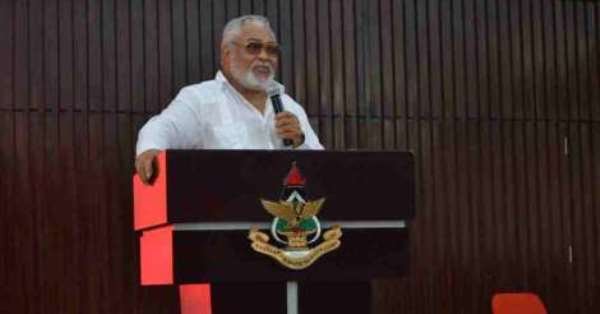 It is fascinating how many of his ideological and political opponents would rush to the defense of Chairman Jeremiah John Rawlings, whenever the career coup-plotter, political chameleon and extortionate “revolutionary” butcher is condignly dished a good serving of his own menu. In the latest of such fascinating feint in defense of the man who thoroughly destroyed Ghana’s judicial system and our national security apparatus, to speak much less about the wanton destruction of our nation’s economic development, we have Mr. Samuel “Sam” Pyne, the Asante Regional Secretary of the ruling New Patriotic Party (NPP), questioning why the 2020 Vice-Presidential Candidate of the country’s main opposition party, the National Democratic Congress (NDC), Prof. Naana Jane Opoku-Agyemang, had not, somehow, played fast and loose with the unflattering details about the bloody Sogakope Generalissimo in Prof. Kwamena Ahwoi’s recently published very authoritative memoir titled “Working with Rawlings” (See “Ahwoi’s ‘Working with Rawlings’ Book: Prof. Naana Opoku-Agyemang Could’ve Done Better – Sam Pyne” PeaceFM.com / Ghanaweb.com 8/9/20).

Mr. Pyne’s query sheepishly begs the question of the clearly stated intent and thrust of the book, as eloquently spelled out in the FOREWORD to “Working with Rawlings,” which was written by the first female ever to be named Vice-Chancellor of the University of Cape Coast, or any other major public tertiary academy in the country, for that matter, who, we are also reliably informed, edited the 200-plus page book. In her two-page FOREWORD, Naana Opoku-Agyemang emphatically observes that nearly each and every detail in the contents of the book is verifiable, meaning that Editor Opoku-Agyemang is fully convinced that Prof. Ahwoi has essentially documented and/or recorded what may be aptly deemed to be “The Gospel Truth” of what transpired between Messrs. Rawlings and Ahwoi, in the presence of some authoritatively credible personalities who constituted the operational core of both the Rawlings-led junta of the erstwhile Provisional National Defense Council (PNDC) and the Rawlings-led government of the faux-democratic National Democratic Congress.

Now, why would an astute and a remarkably articulate politician-statesman like Mr. Pyne wish that Editor Opoku-Agyemang had recommended the expurgation of certain historical and personally experienced accounts in the book, merely because those details were highly unlikely to please the Rawlings faction of the National Democratic Congress? You see, it is this kind of moral timidity and diffidence that ensured that an extortionate dictator like the former Flight-Lieutenant of the Ghana Airforce would ruinously rule the country for some 20 years, to absolutely almost nobody’s comfort, delight or pleasure except, ironically, “revolutionary freeloaders” like the author of “Working with Rawlings,” who, by the way, has now decided to out his former prime political benefactor, as it were, about a fact that most Ghanaian citizens who suffered untold hardships under Mr. Rawlings have always known, to wit, that Chairman Rawlings was, after all, no “plaster saint” at all – whatever the latter descriptor or epithet means – but the immitigable and insatiable monster that the overwhelming majority of the Ghanaian people have always known him to be and to have been.

Those who saw a thirty-something-year-old Mr. Rawlings upend traditional Ghanaian culture and moral values, publicly insult and humiliate Ghanaian leaders old enough to be Chairman Rawlings’ own father and grandfather, can scarcely feel any sympathy or pity for the jet-flying political scam-artist who, without question, created the very “Babies with sharp teeth” who Chairman Rawlings would have the rest of us believe had been hatched in outer space and callously let loose on the rest of us by a Wicked God resident somewhere Beyond the Clouds. You see, the beauty and splendor of poetic justice and/or retributive justice, in classical Shakespearean parlance, is the fact that it ultimately and invariably mirrors the cynically self-proclaimed victim.