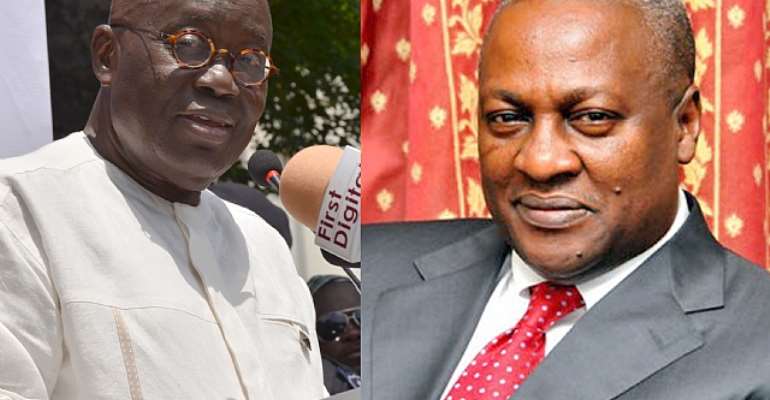 American democracy has so deepened and met the tests of time because in part of the three presidential debates they do before every presidential elections. I heard John Mahama has accepted the challenge to debate Nana Akuffo-Addo but in less than 24 hours after the acceptance, the NPP has withdrawn the debate offer by Nana Addo.

Nana Addo didn’t take part in the debate organized by the Ghana Broadcasting Corporation in 2016 and it is beginning to look like he will not debate in 2020. He went to Peace FM in 2016 and debated himself and Ghanaians can forgive him because he didn’t have any record to run on but Ghanaians should never forgive him if he doesn’t debate because he now has a record to run on.

To further deepen our democracy, the 2020 presidential debate should not be limited to who is ready or who is not, or who wants to debate and who doesn’t want to. It should be compulsory, like in US. If parliament needs to pass a law to that effect, it should do. If the EC needs to lay a CI to that effect, it should do it. Everything should be made to make it possible for a presidential debate to happen between Nana Addo and John Mahama. I have one recommendation:

As soon as John Maham announced his $10B infrastructure PUSH, Dr. Bawumiah came out to showcase the infrastructure achievements by his government. Even though he embarrassed himself as a PhD holder and a Vice President, he did what his masters wanted him to do. So to force Nana Addo to the debate table, the NDC should explain to the Ghanaian voter in simple terms why Nana Addo is running from the debate.

Going into the elections, NDC should tell Ghanaians that the NPP is running away from the debate because they say John Mahama has no message. Meanwhile, John Mahama used GHC 40B borrowed, 84 ministers, less than 800 presidential staffers to construct the Interchanges, Terminal 3, District and Regional Hospitals, Cape Coast and Kumasi Markets, Cape Coast Sports Stadium, E-blocks, Asphalt Roads, chip compounds, water projects and many more.

On the other hand, Nana Addo has borrowed GHC 135B, used 125 ministers and over 1000 presidential staffers but all they pride themselves are boreholes, toilets and water tanks. Then ask people who is the better candidate to be the next President. Once this message gets into the minds of Ghanaians, Nana Addo will come to the debate table.

Nana Addo has said he will hand-over peacefully to John Mahama on January 7, 2021. But unless he sees that he is losing, he will continue to take Ghanaians as fools. He got away in 2016 but not in 2020.

Nana Addo is NOT stupid to debate John Mahama unless he is forced to do so. Let’s all get him to debate. It deepens our democracy.