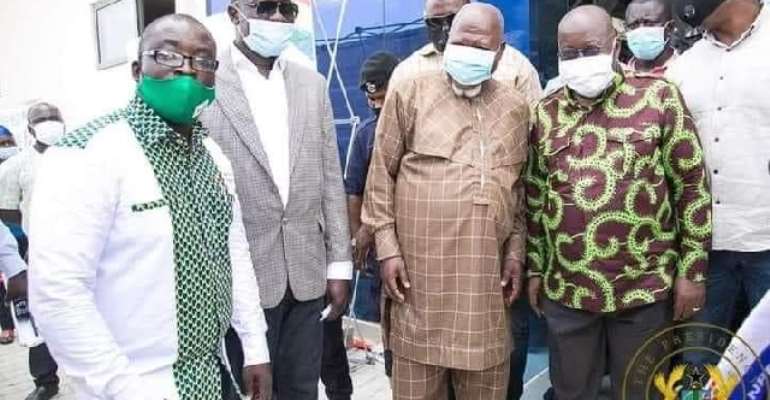 The former Central Regional Chairman of the main opposition National Democratic Congress (NDC), Mr Allotey Jacobs, has said: “Initially, we took the one district one factory for a joke but we’ve realised that it can employ a whole lot of communities”.

Mr Jacobs, who joined President Nana Akufo-Addo to officially open the Ekumfi Fruit and Juices factory as well as Casa de Ropa potato factories in the Central Region, told journalists that they should not be “surprised seeing me at Ekumfi Fruit Juice and Casa de Ropa [factories]”.

According to him, the two factories are changing the lives of the locals in the Central region citing Ekumfi alone, where, he said “almost about 600 workers” have been employed as a result of the fruit juice factory.

“And the surprising thing with Ekumfi Fruit Juice [factory] is that, the fishermen are also planting the pineapple”, he observed.

At Gomoa Bewadze where Casa de Ropa is located, Mr Allotey Jacobs said the “villagers have taken it upon themselves to help [sustain] this factory”.

“It’s employment because they are being paid every month”, he said.

“And like the President said, 80 per cent of the employees are local women.”

That in itself, Mr Allotey Jacobs noted, mean “you are putting money into people’s pocket and, therefore, we believe that there’s the need for us to co-join with others, especially our entrepreneurs who are coming from the region, for us to help so that in the next four years to come, we may have almost about 20 factories under 1D1F”.

Opening Casa de Ropa on Friday, 21 August 2020, President Akufo-Addo described the day as “a very happy day for the Central Region, and, indeed, for mother Ghana”, especially as he had, on the same way, also opened the Ekumfi Fruits and Juices Factory, in Ekumfi.

“This ceremony was in fulfilment of the promise by the government, in partnership with the private sector, to set up, at least, one medium- to large-scale enterprise in every district of Ghana,” the President said.

Congratulating the management of Casa de Ropa on the progress they made have, and for being able to process orange fleshed sweet potato into puree, which are further processed into biscuit, bread, crisps and chips using improved production technology, the President noted that 1,150 direct and indirect jobs have been created by the factory.

“Another milestone achieved by the factory is the fact that women currently constitute more than 80 per cent of the workforce, as a result of a deliberate policy to empower women. As the African Union Gender Champion, I commend management for this decision,” he said.

President Akufo-Addo applauded the decision taken by Casa de Ropa to be a centre of excellence, through the collaboration with universities and other agricultural institutions, to create a platform for research and knowledge sharing between academia and industry.

“This factory, gradually, is positioning itself as one of the most innovative food processing companies in the country, with the potential to expand its operations to take advantage of the domestic market for processed food as well as the African market,” he added.

The President continued, “Government remains committed to supporting private sector operators, like Casa de Ropa, to become globally competitive, and, thereby, take advantage of market integration frameworks such as the African Continental Free Trade Area (AfCFTA), whose Secretariat has been established and commissioned in Accra.”

Commending the management of Casa de Ropa Ltd for their diligence and commitment to enhance the potential of sweet potato as a new cash crop for farmers in Ghana, the President also commended EXIM Bank for granting a financing facility of about GHS14 million in support of the project, under the 1D1F programme.

Don’t give me reason to close down schools again – Akufo-Add...
36 minutes ago