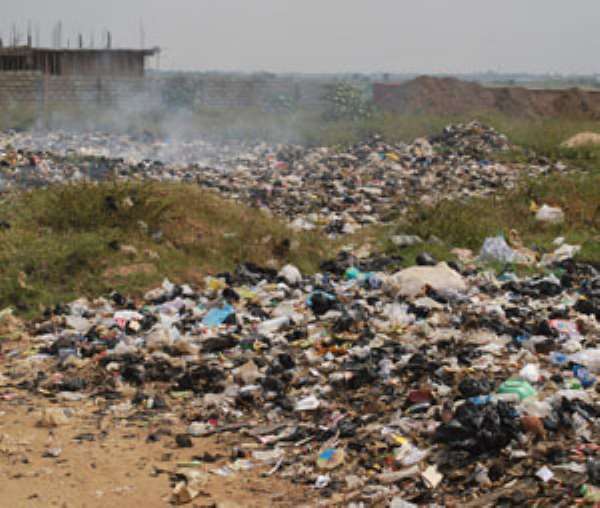 Growing up, aside from knowing my mother was not just called mama but also Mrs. English-first-name and Husband's-last-name, it was important to know where I stayed (it is phone number nowadays). Older siblings did a good job by teaching the younger ones that. It was a nice game, I had thought, until it became handy. In a very big market – I would not be exaggerating if I say one of the biggest in West Africa – I let go of Maame Yaa's hand. The chopa-chops received as ntosoↄ fell. While it rolled, I followed the toffee keenly with my eyes till I got it back, but also realized I was at an unfamiliar place, alone. I ululated, 'Mama yei!' A Good Samaritan took me to the information centre nearby. There, they asked of my name and my parents', age, and how come I was in the market – lost but found, and at the same time, missing to my sister. Then, they asked, “Where do you stay?”

“My house is at Community specifically at Area-Neighbourhood. It is close to the big refuse dump and the missionary basic school where the pupils wear green shorts or pinafore over beige shirt.” I could have added the colour (painting) of the building and talked about the two cashew trees in front of it and the orange tree by it. But those landmarks were not as reliable and important as the permanent ones – school and refuse dump. They, concerned adults around, knew exactly where I was talking about and announced it. After a while, Maame Yaa appeared. She had cried more than me. We hugged and made it home. It's good to be home. We both knew we could not tell anyone I got lost in dwa-keseɛ-mu, so we shared a secret till it was no longer a secret.

After many years after from home, I came back. Almost all looked the same but for the deterioration and the big refuse dump likened to Afadjato in my eyes, at best, Mount Kilimanjaro. Irrespective of where you stand, you see the peak. The rain welcomed me. And as communicated in the childhood song, 'the wind precedes the rain.' Built-up whirling dust gathered anything it could pick up. Years ago, whirling dust would have been red dust. That day it was colourful, mainly black and white debris, patterned beautifully. Its whistling pines made the whirling look like flying birds cawing above. The debris spread to every house, it was obvious. In my home, some covered the aloe vera plants, some landed in the pond the animals (dogs, cats, fowl, and goats) drink from, and the one that made my stomach churned, landed right into the barrel that harvest rainwater. That water was needed badly. After our president announced that water is free, immediately, water became scarce everywhere. With more free water as announced during the mid-year budget review, we are doom!

What I Realized – The Dangers
For days, I thought about what I could do about this refuse dump which is about 300 metres or even less away from me. Initially, my home was directly adjacent the refuse dump, but it moved farther away. Others built in between. Considering the dangers living close to a dump site could have on humans – respiratory infections, pneumonia, eye irritations, slurred speeches, anaemia, memory disturbance, head tremors, and stunting and wasting particularly in children – something needed to be done. Children, sadly, running around in the neighbourhood au naturel or in oversized shirts, sucking their thumbs, with patches of rings on their heads and bodies, bellies jutted out, and also ebullient, showed these signs: reddish or pale or watery eyes; slurred speeches; stunting; wasting; leaking nose or mucus dried on their philtrum as mustache; and at times sick from pneumonia and/or anaemia medical diagnoses.

As if nature, or whoever in charge knew my worry. A bulldozer came. The refuse dump, more than two decades old, was parting from us. Such a joy, isn't it? But NO! Mothers tied their clothes around their waist. Fathers exposed their muscles with the singlet and shorts they wore. They would fight, if it came to that. They, actually, we protested. “Not today! Not tomorrow! Do not move the refuse dump! We like it where it is!” And so the protest won. How could we have allowed the refused dump to be moved to the primary school field to make way for another public toilet? Generate revenue internally? Anyway, has the IGR benefitted the community? …Oh, good Lord, children play on the ground, on the field, unsupervised! The refuse dump stayed ultimately.

Now, coronavirus has come. As to whether it has come to stay or not, I cannot say. It may not leave anytime soon given the present conditions. In my community, deprived, many people do not believe there is coronavirus in Ghana. “If coronavirus was truly in the country, why don't they show it on television like it is done in Aburokyire? …Seeing is believing… AIDS was feared because we saw, not only heard, what it could do to you… This COVID-19 is political, don't you know it is an election year in many parts of the world… Hmm! They want to loot the nation's money and say they spent it to fight COVID-19… And have you heard of 5G? …Oh! “There is no coronavirus.” They say. They may be right, they may not. However, the refuse dump scares me if there is that virus.

The author is a researcher and consultant with specialty in equity, sexual and reproductive health, women's health, adolescents' health, population studies, and public-private partnership. She has worked with international organisations and universities in the United States of America and Ghana.

Some MMDCEs will be approved in December because of controve...
5 minutes ago