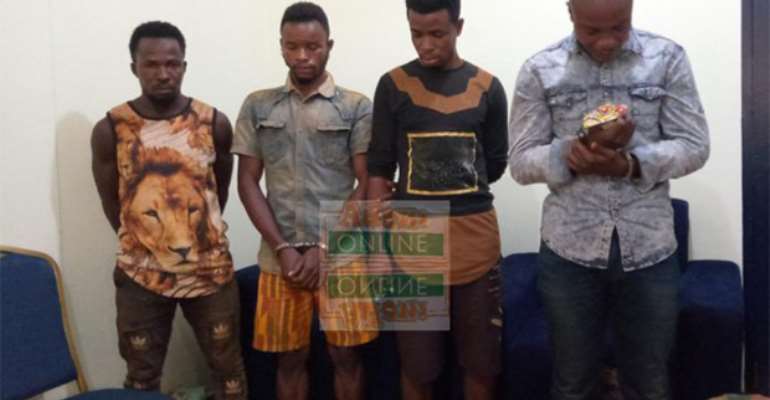 Three persons and an immigration officer, who reportedly 'robbed' a mining firm in the Sefwi area of the Western North Region, have been remanded in prison custody by a Sefwi Wiawso District Court.

The suspects are Abunbunlar Ebenezer, 31, and Bashiru Adaza, 20, both illegal miners; an ‘okada’ rider, Kwasi Isaac, and the Immigration officer whose name was given as Samuel Akuley.

The prosecutor told the court that the police at Sefwi Asempaneye in the Juaboso District had a tip-off that three motorbike riders had robbed a mining firm at Sefwi Boinzan in the same district.

The police quickly rushed to the scene and managed to arrest three of the suspects.

A search on them revealed one locally manufactured pistol, a single barrel gun, eight live cartridges and one military uniform.

The rest were one immigration officer's uniform, a pair of desert boots, two head masks, a machete, crash helmet, a gold detector and eight mobile phones.

According to the prosecutor, after the three were arrested, one Samuel Akuley, an alleged immigration officer's name was mentioned as the owner of the items retrieved, and he was subsequently picked up.

The four suspects would reappear on September 3, 2020.

MMDCE appointments shouldn't be seen as job for the boys' - ...
56 minutes ago