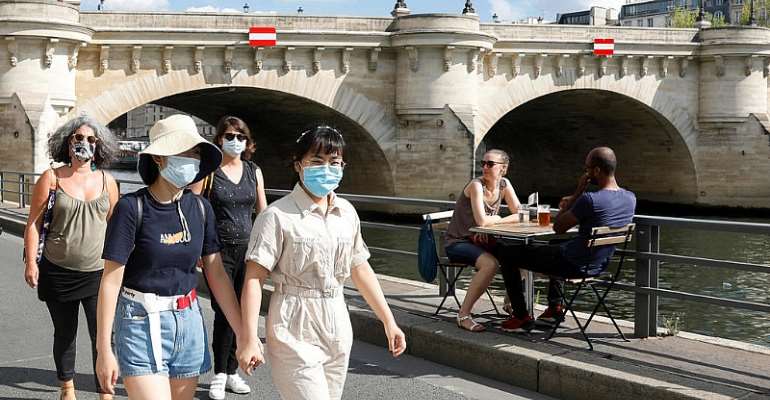 France's public health service has reported 4,867 new Covid-19 cases in an increasing daily trend that has officials concerned. However, so far the rising number of infections has not translated into a rise in hospitalisations.

The 4,897 new cases reported on Sunday marked France's largest single-day tally of new Covid-19 cases since the height of the epidemic in April, and continues a trend seen in recent weeks.

While day-to-day fluctuations vary, the weekly average number of new cases has climbed from less than a thousand in late July to 3,480 as of Sunday.

The public health service, Santé Publique France (SFP), put parts of the Paris region, the Bouches-du-Rhone in the southeast, the Hérault in the south, the Sarthe in the west and Guiana overseas among the most vulnerable of 38 administrative departments currently on a watch list.

However, the numbers and rates of hospitalisations, including in intensive care, and mortality are nowhere near what they were in late March and early April, the height of the epidemic that followed the appearance of the new coronavirus in France.

Part of the rise in cases may have to do with testing capacity. Health Minister Olivier Véran said Sunday that France was assuring more than 700,000 tests per week, a target set when the government announced plans to lift confinement in May.

But SPF noted the rate of positive cases among those tested was at 3.6 percent, up from 2.8 percent a week ago, and Véran warned the positive rate had tripled in August.

Véran also noted a slight increase in the number of patients with serious cases.

“The number of persons hospitalised, including in intensive care, is increasing, certainly at low levels, but it is increasing,” he tweeted.

“We are facing a risky situation,” the minister told newspaper Le Journal du Dimanche. “After having gently taken the lid off the pot, the water is starting to boil.”

In its most recent weekly overview published Thursday, SPF indicated the virus appeared to be spreading most among young adults.

Official figures show overall numbers of patients hospitalised with Covid-19 has decreased steadily since 14 April, when 32,292 people were in hospital, to 4,709 on Sunday.

However, since falling from a peak of 7,148 on 8 April, the number of Covid-19 patients in intensive care has remained in the high 300s or low 400s for the past month.

France's government has ruled out imposing another nationwide lockdown akin to the one that kept much of the country confined to home between 17 March and 11 May, preferring to consider measures at local and regional levels.

On the economic front, Economy and Finance Minister Bruno Le Maire said Monday the government was putting public health and economic recovery “on the same level” as the country approached a sensitive return to school and work after the summer break.

“We're putting the health emergency and the economic emergency on the same level,” Le Maire said, as the government postponed for one week announcements of how it would deploy a 100-billion-euro recovery package announced by President Emmanuel Macron in July.

“The measures are ready, the recovery plan is ready,” Le Maire continued. “They will be adopted this year and come into effect next year.”

On the economic front, the government held to a forecast of 11 percent negative growth this year, more than the 9 percent foreseen by national statistics office Insee, citing uncertainty over the outlook for the global economy.

“While there has been a strong recovery in May and June, there is still much uncertainty between now and the end of the year, namely with Brexit, the US election and the new Chinese five-year plan,” Le Maire said.

“All that will weigh on world trade and therefore on French growth.”