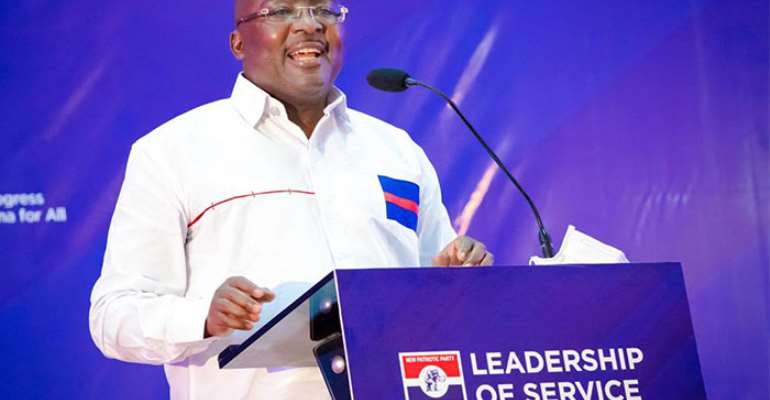 VICE-President Dr Mahamudu Bawumia has flayed a promise by the flagbearer of the opposition National Democratic Congress (NDC), ex-President John Dramani Mahama, to offer free primary healthcare when given the mandate, saying the move is “meaningless”.

According to him, 95 per cent of the disease burden from primary to tertiary healthcare is already covered under the National Health Insurance Scheme (NHIS) which offers non-payment of premium by children, the elderly and vulnerable groups in the country.

Mr. Mahama, whilst introducing his running mate recently, stated that a new NDC administration led by him would unveil a free primary healthcare plan before the end of 2021, claiming it would make the provision of primary healthcare to all Ghanaians.

It would be recalled that in 2008 when the NDC was in opposition, it promised One Time Premium payment for the NHIS but when many based on that promise and voted for the party to win power, it turned around to say it was impossible to implement such a policy and quickly ran away from it.

During the manifesto launch of the New Patriotic Party (NPP) in Cape Coast, the Vice-President pilloried the NDC leader's proposal, saying, “If you say you are going to offer free primary healthcare it is almost meaningless. If you have primary healthcare and you don't have an NHIS card and go for a checkup and they say go for secondary treatment what are you going to do?” he asked rhetorically.

Dr. Bawumia said the NPP government intended to focus on health promotion and prevention as part of primary healthcare through the NHIS to achieve universal healthcare.

He stated that the government, in its next term, would build additional facilities and augment the human resource base at medical schools to increase access to enrolment.

Dr. Bawumia said the government would get rid of import duties on sanitary pads to improve health conditions, particularly for girls, and in the ultimate would make sure that sanitary pads are produced in Ghana.

He revealed that the government, in its next term, would again focus on telemedicine in this era of digitalization to reduce cost as doctors can diagnose and prescribe at a distance without necessarily be at a particular location.

According to him, the NPP government under President Akufo-Addo has a policy initiative that will make all tertiary students, except teacher and nursing trainees, who will be on allowances, to get the option to obtain a student loan without the requirement of a guarantor.

“The current scheme asks for guarantors and a lot of people are not willing to put their pensions on the line, and so many students are unable to have access.

“We want to make it guarantor-free and all a student will need is his or her national ID card to be able to access a loan, and once you complete your tertiary education repayment will be deferred for one year after your national service,” he pointed out.

This GALOP programme, he stated, would target these schools for academic improvement by giving them additional funding plus their capitation grant, adding that the funding for the project has already been secured by the government.

“It will also support teachers in these schools to raise the level of performance so that the students will not be left behind,” he added.

According to him, one of the areas that have not received enough attention is special needs education and that the government intends to focus on it by increasing the resources allocation and infrastructure for special need's education across the country.

“A lot of our children suffer from autism, cerebral palsy and others need support. We are going to increase the resources and infrastructure for special need's education across the country,” he disclosed.

He continued that the government would also expand infrastructure to increase access for professional legal education in the country as the infrastructure limits intake, thereby getting many prospective lawyers frustrated.

“We will complete the provision of free wifi at all senior secondary schools and public tertiary institutions. The process has started and a contract has already been awarded and ECG is levelling its fibre network across the country and before the end of this year we will be starting from the ECG perspective on the tertiary institutions.

“By next year, we expect our senior high schools and tertiary institutions to have free wifi for their studies,” he said.