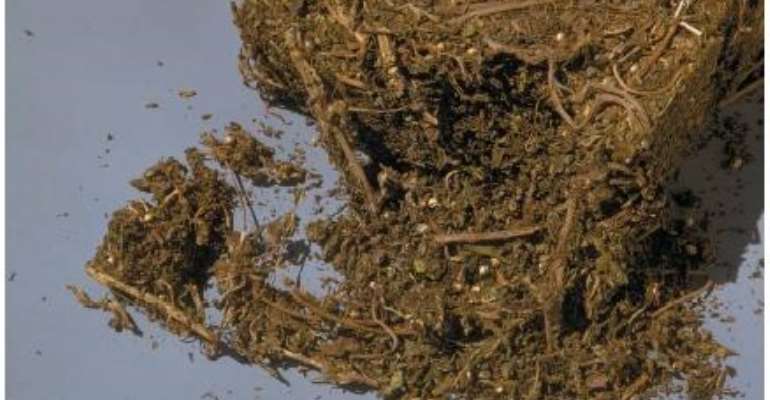 As the nation struggles to come to terms with the cocaine scandal has rocked her in recent times, new trends for the promotion of another narcotic drug, Indian hemp, are beginning to unfold.

Within the last few weeks some unscrupulous business entities have begun promoting Indian hemp, popularly referred to as 'wee', through the use of car stickers and arm bands.

Interestingly, the car stickers with the 'wee' leaves have the caption 'Weed of Wisdom' boldly written beneath them, while the arm bands come in the Red, Gold and Green colours with the 'wee' plant or leaves boldly embossed in black on the yellow colour.

The reference to the hemp as the 'Weed of Wisdom' according to those who patronize it, is to justify the age old belief that its use was biblical since the legendary King Solomon used it so much that after his death the weed was planted on his tomb to give him permanent supply.

Wittingly, the black leaves have been embossed on the yellow colour so that one might easily mistake it for the black star in our national colours or paraphernalia of the national soccer team, Black Stars.

Research has shown that people only get themselves associated or aligned with a trend, fashion, anything in vogue; philosophy or ideology that they believe in and, therefore, it would be right to draw the conclusion that those who buy these stickers and post them on their vehicles are ardent patrons of this so called 'Weed of Wisdom'.

This phenomenon is, however, worrying as it runs counter to the fight against the use of such drugs, especially among the student population who are most vulnerable to these vices in society.

The sale of these arm bands is surprisingly being done by street hawkers in traffic with the boys virtually convincing innocent travellers to buy this 'Weed of Wisdom'.

It has now become fashionable to see people wearing colourful arm bands, especially in the national flag colours, in the wake of the recent surge in patriotism, following the Black Stars' exploits at the recent World Cup tournament in Germany.