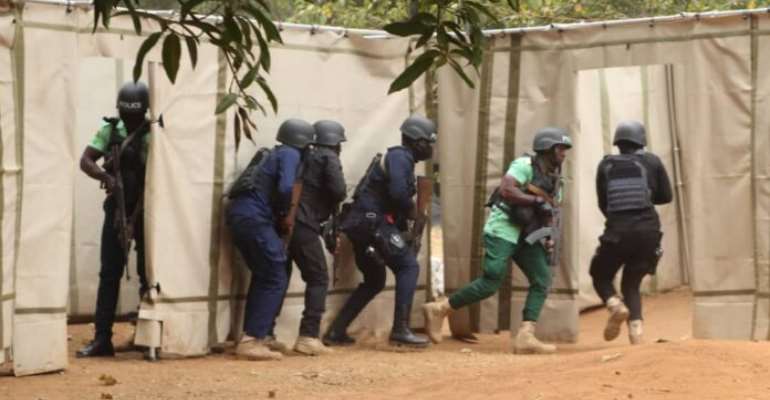 Two hundred and seventy-six (276) Security personnel drawn from Police, Immigration and the Ghana Ambulance Service have passed out after 67 days of rigorous training in combating counter terrorism and violent extremism at the Counter Terrorism and Concentration Camp located in Huhunya in the Eastern Region.

This is the third batch of security personnel trained this year as part of preparation to secure the stability of the country before, during and after the December 7 Presidential and Parliamentary Elections.

Addressing the pass out parade for the course participants on behalf of the Inspector General of Police James Oppong- Boanuh, the Eastern Regional Police Commander, DCOP Akrofi -Oyirifi Edward Johnson said the Police Administration will continue to build capacity of personnel to equip them with the skills and knowledge to deal with emerging sophisticated crimes.

“For you, the participants assemble here, I want to assure you that the Police Administration is doing everything possible to improve the infrastructure base and facility at the camp to enable you train in a more friendly environment whenever you are assigned here in future.

He advised the beneficiary security personnel to resist the urge of unleashing their robotic and agile skills to intimidate and brutalize innocent civilians adding that they must submit to the democratic dictates of the constitution.

He assured that, the Ghana Police Service in collaboration with its sister security agencies is committed to ensuring peaceful election in December 7.

The Head of Border Management at the GIS, Commissioner of Immigration(COI), Mr Isaac Owusu Mensah said the Immigration Personnel trained during the exercise would form the nucleus of a new unit at the National Headquarters of the Ghana Immigration Service to be called Rapid Response and Counter Terrorism Unit stressing that it would subsequently be established in all Regional commands of the service to help efficiently Police Ghana’s Border and avert acts of terrorism. Additionally, some 500 Immigration Personnel are to be trained by the end of August in this regards.

“The confidence that Ghana Immigration Service has in this kind of training has opened up further discussions for training of more personnel to form the Rapid Response and Counter Terrorism Unit at the Regional Commands throughout the country .This trained personnel will also augment border patrol duties at the various sectors as you may know already Ghana Immigration Service stands as the lead agency in our country border security architecture ”

He added “in this regard a training program has been scheduled to roll out from 29th of August 2020 for about 500 officers and men of the Ghana Immigration Service from across the regions. It is expected that these numbers will subsequently be doubled in meeting the dynamics and demands of the service “.

Executive Director of National Ambulance Service Professor Ahmed Nuhu Zakaria on his part appealed that the service be equipped with the necessary security accoutrements to enable it rise up to the occasion in case of any national security emergency.

"We need the hand of God like never before against economy d...
24 minutes ago