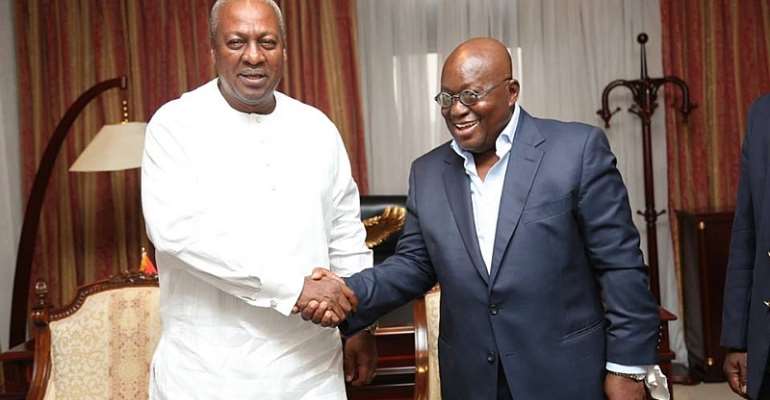 When the desperate Candidate John “Airbus-Kanazoe” Dramani Mahama dares President Addo Dankwa Akufo-Addo to a debate on the infrastructural development track-record of both major political parties, the perfect riposte is not for the National Organizer of the ruling New Patriotic Party (NPP) to reply that a public debate between these two major presidential candidates is not yet on the table, but rather that the current disparate electioneering campaign tours of the country by Messrs. Akufo-Addo and Mahama are the best and the most effective debates between the two contenders for the country’s topmost elective job (See “We Won’t Debate Mahama, It’s Not Our Campaign Strategy – Sammy Awuku” Modernghana.com 8/20/20).

Perhaps an even more effective response to the former President’s gauntlet is the following quote issued by the challenger himself sometime during the 2008 electioneering campaign season when, as the running-mate of the then National Democratic Congress’ Presidential Candidate, Prof. John Evans Atta-Mills, late, Mr. Mahama had this rather cynical remark to make about the phenomenal achievements of the John Agyekum-Kufuor-led government of the New Patriotic Party: “If you vote for someone because of schools, hospitals, roads and interchanges, you have a weak mind because it is government’s responsibility.” The foregoing quote, by the way, was recently WhatsApped to me by Mr. Felix Otoo, a native of the Asebu-Kwaman district of the Central Region. My good friend is also the Vice-President of the local branch of Citibank where I live, in the Fordham Road section of The Bronx, New York City.

I guess the most significant part here is that in challenging President Akufo-Addo to a debate on the comparative infrastructural development track records of the New Patriotic Party and the National Democratic Congress, Candidate Mahama could not have shown himself to be even more weak-minded than he could aptly be said to be. But, of course, the part of the gauntlet that piqued my interest the most was when Candidate Mahama mockingly said that “today, I can see a scramble [by the operatives of the New Patriotic Party] to grab even more KVIPs and any infrastructure and tout it as an achievement.” Of course, Candidate Mahama knows that he could not debate Nana Akufo-Addo on such landmark social intervention programs as the fee-free Senior High School Policy Initiative, which the Cash-and-Carry ideologue virulently opposed and now has been vigorously and pontifically claiming that the SHS policy initiative is scandalously beset by a lot of kinks in its implementation, of which he is the best qualified Ghanaian leader to fix or resolve the same.

That is how desperately pathetic this grossly incompetent megalomaniac is. As well, Candidate Mahama fully well knows that he cannot debate Nana Akufo-Addo on the National Health Insurance Scheme (NHIS), which he criminally and collusively bankrupted with Mr. Sylvester Mensah, the equally grossly incompetent Mahama-appointed former Executive-Director of the National Health Insurance Authority (NHIA), whom the then-President John Dramani Mahama put under house arrest and had his passports confiscated and his bank accounts frozen. That the then-President Mahama never had Mr. Mensah prosecuted for embezzling funds meant for the upkeep of the health of the hardworking ordinary Ghanaian citizen, ought to tell voters the level of credibility of Mr. Mahama’s promise to fight corruption, if he should be returned to Jubilee House.

It is also rather outrageous for Candidate Mahama to smugly disdain the idea that President Akufo-Addo would pride on the fact of the New Patriotic Party’s having constructed more KVIPs or public toilet facilities than all the previous Fourth-Republican governments combined. Under the four-and-half-year tenure of former President Mahama, open defecation on our beaches and our open gutters was the Number One Tourist Attraction. Significantly, it was the indicted kidnap suspect, Mr. Samuel Ofosu-Ampofo, the National Chairman of the National Democratic Congress and the Mahama-appointed Minister for Local Government and Rural Development, staunchly backed by Mr. Edwin Nii Lante Vanderpuye, the cynical and opportunistic Deputy Local Government Minister, who prevented the then Greater-Accra Mayor, Dr. Alfred Oko Vanderpuije, from dredging the Odaw River, in the flood-prone Chorkor slum suburb of Accra because, as Nii Lante Vanderpuye shamelessly insisted at the time, dredging the Odaw River and demolishing some illegally constructed shacks in the path and bed of the Odaw would not be good for the business of retaining his parliamentary seat.

Such, Dear Reader, is the morally reprehensible caliber of the typical National Democratic Congress’ politician. And the eligible Ghanaian voter had better be warned.