By Sunghee Hwang, with AFP Bureaus 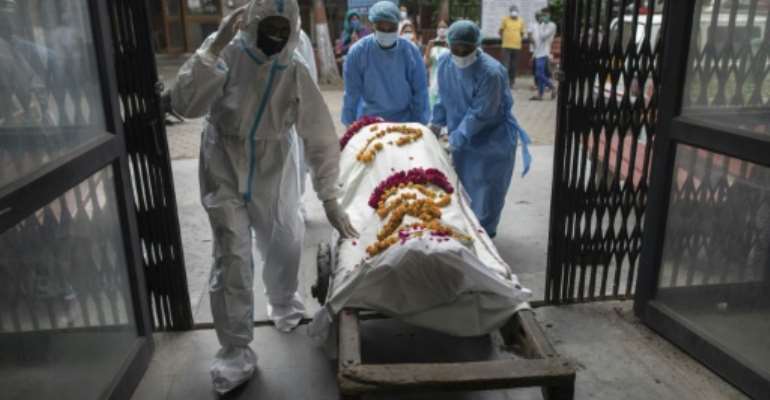 The coronavirus pandemic has claimed more than 800,000 lives across the world. By Xavier GALIANA (AFP)

South Korea ramped up coronavirus restrictions on Sunday to try to contain a growing outbreak, as many countries around the world battled worrying surges in infections.

The pandemic has killed more than 800,000 people globally, and continues to unleash destruction with areas such as Western Europe detecting spikes in infections not seen for many months.

Infections have soared past 23 million globally, and some countries are still facing their first waves -- such as India, which crossed three million cases on Sunday.

South Korea, which had largely brought its outbreak under control, tightened curbs to try to contain a new, growing cluster of cases.

"The situation is very grave and serious as we are on the brink of a nationwide pandemic," warned Jung Eun-kyeong, chief of the Korea Centers for Disease Control and Prevention.

Nightclubs, karaoke bars and beaches have been closed, with tight restrictions on large gatherings and religious services, after hundreds of infections were linked to Protestant churches.

Face masks will be mandatory in the capital Seoul's public areas from midnight.

Lockdowns, social distancing and face masks are among the few options available to governments with no effective treatment or vaccine available yet.

With no vaccine yet, measures such as face masks are among the few options available in the fight against the coronavirus. By Ulises Ruiz (AFP)

India, which imposed one of the world's strictest lockdowns, has relaxed it over recent weeks to help ease the pressure on its reeling economy.

But that has also led to a sharp rise in cases, taking its total past three million.

"We are seeing the virus spread across India," said K. Srinath Reddy from the NGO Public Health Foundation of India.

The World Health Organization, however, said Friday that the world should be able to rein in the disease in less than two years.

Italy -- once the European epicentre of the virus -- said Saturday it had registered more than 1,000 new infections in the past 24 hours, the highest level since the end of a punishing lockdown in May.

Large gatherings, including religious services and festivals, have been impacted around the world. By Hussein FALEH (AFP)

The story is similar across Spain, Germany and France.

The Rome region also said it had recorded a record number of cases in the past 24 hours, a rise health officials blamed on people returning from holiday.

Most of those infected are young people who are not showing symptoms, the Italian capital's health official Alessio D'Amato said, warning them to stay at home.

"Don't feel invincible," he urged them.

The virus lockdowns and social distancing measures have unleashed vast economic destruction and impacted all types of social activities, including sports games and concerts.

In Germany, a university has launched a series of pop concerts under coronavirus conditions, hoping the mass experiment with 2,000 people can determine whether large events can safely resume.

But with no vaccine yet, economies in hard-hit regions like Latin America are struggling to contain the staggering costs of the pandemic -- with a rise not only in poverty but political turmoil and crime too.

The United States remains the worst-hit country in the world, with nearly 5.7 million infections and deaths approaching 180,000.

The pandemic is set to impact the US presidential election, with a potential political crisis brewing over mail-in ballots. By Olivier DOULIERY (AFP/File)

The run-up to the presidential election has been dominated by the coronavirus, with President Donald Trump facing intense criticism for his handling of the crisis.

The pandemic is set to impact the electoral exercise itself, with Americans expected to vote by mail in massive numbers instead of visiting polling centres.

But that has caused another political standoff, with the postal service warning most states it could not guarantee on-time delivery of mail-in ballots.

Trump -- trailing his challenger Joe Biden in polls -- has opposed more funding for the cash-strapped US Postal Service, acknowledging it would be used to help process ballots.

He has repeatedly and baselessly linked mail-in voting to election fraud.

Biden's fellow Democrats in the US House of Representatives approved a $25 billion infusion for the USPS on Saturday, but it is likely to die in the Senate -- which is controlled by the Republicans.

Some MMDCEs will be approved in December because of controve...
32 minutes ago