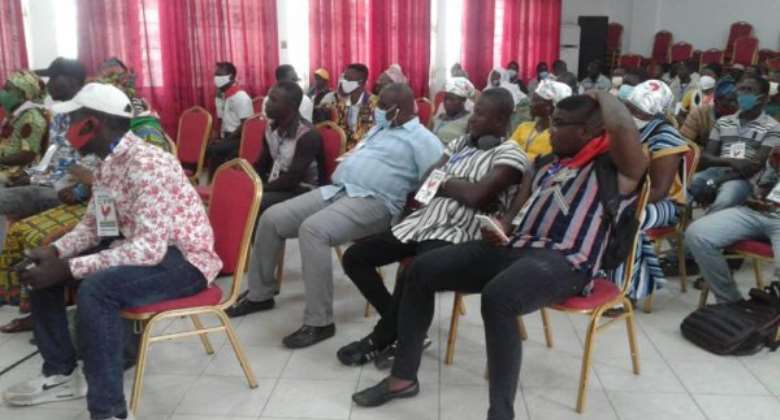 Mr. David Deribaa, the Upper West Regional Chairman of the Convention People's Party (CPP) has expressed hope that the party would work harder than before to wrestle power from the NPP come December 7.

He said the "so called two major political parties' dominance will end in December" and claimed that NPP/NDC had misruled the nation for about 28 years now thwarting development, hence the need for them to hand over the mantle of governance to the CPP.

Mr Deribaa said this in an interview with the Ghana News Agency (GNA) in Wa on Saturday on the sidelines of the party's National Delegates Congress.

The CPP had decentralised its National Delegates Congress to all the regions across the country to elect the party's Presidential Candidate for the 2020 Presidential and Parliamentary elections.

It was also to elect the National Executives of the party as well as to conduct a referendum to amend the party's constitution.

In all, 108 delegates were expected to participate in the exercise in the Upper West Region, comprising nine delegates from each of the eleven constituencies and nine Regional Executives.

Mr Deribaa noted that the NDC and NPP had nothing better to offer the good people of Ghana rather than to fight for power to enrich themselves, fulfill their parochial interest and to engage in "self-aggrandizement".

"We have been cheated and sidelined for far too long. Ghanaians are discerning, there will be a surprise in the general election", he said.

He explained that Dr Kwame Nkrumah was a development oriented leader,which the CPP stood for, and urged the electorate to vote massively for the CPP come December 7, 2020.

Mr Deribaa advised the youth to desist from engaging in practices and activities that were injurious to their lives and to stay alive and vote for the CPP in the general election to better their livelihoods.

He said the CPP would commence vigorous campaign to sell its message to the electorate after the party had determined its presidential candidate.

Mr Iddriss Nuhu Saeed, the Upper West Regional Chairman of the People's National Convention (PNC), and Chairman for the CPP National Delegates Congress in the region, urged the delegates to exercise their franchise peacefully devoid of malice.

He encouraged the aspirants to accept the outcome of the congress for peace to prevail within the party to enable them to participate actively in the upcoming general election.

Security personnel from the Ghana Police Service were present at the congress ground to ensure peace and orderliness throughout the exercise.