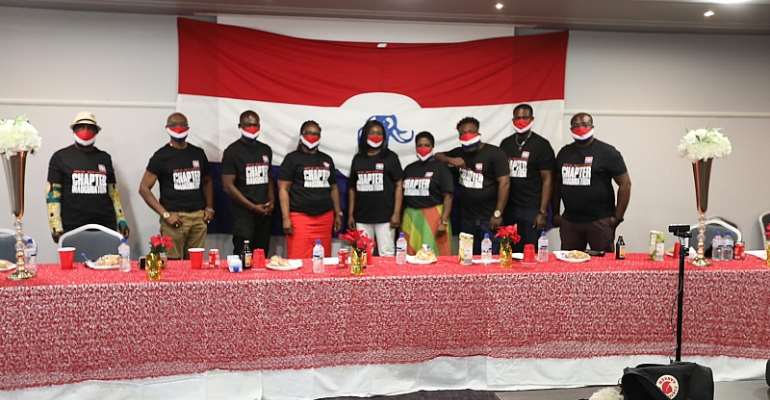 In a speech to mark the inauguration, the chairman of NPP UK Mr. Kwaku Nkansah commended the members of the chapter for bringing themselves together to identify with the New Patriotic Party. He congratulated the new executive for the initiative and encouraged them to expand the membership to include as many Ghanaian residents in all areas of West London.

He admonished them to go and tell the story of the successes and unprecedented achievements of President Nana Addo which has made NPP so attractive in the UK leading to the opening of more chapters. He recounted the many projects that the Government has brought to Ghanaians, as part of its Agenda for Change, Creating Equal Opportunities for all. He continued that the Government had rolled out policies such as the Free SHS, the One district one factory, Jobs for the graduates through the Nabco scheme, the upskilling of the youth through the granting of more scholarships , the delivery of medicines and blood, through the drone delivery system,

infrastructural developments including Roads among several others.

The executive of NPP UK also advised and encouraged the new chapter to carry on the mantle of nation building by supporting the policies and programmes of the government and to provide the necessary resources to the adopted constituency for 2020 election.

The Branch Organiser , Mr Richmond Boateng advised members to impress on Ghanaians for the need to maintain the NPP in power for as long as possible for continuity in programmes, projects and policies. He further commented on the youthfulness of the group and said they constitute the future of the NPP in UK.

On behalf of the West London, the Chairman, Mr Isaac Appiah-Kubi thanked the NPP UK executives for the support and inauguration in his speech . He said the chapter started with only 10 people and in 10 months has grown to over 70 members.

Further he quoted Isaac Newton to celebrate some people who contributed to the successes of the chapter ,

“ If I have seen further it is by standing on the shoulders of Giants, We are being inaugurated today because some Giants provided their shoulders for us to stand on and wisdom demands that we do reorganise and appreciate these people accordingly”. He narrated

According to him , Mr. Kingsley Adumattah Agyapong ,the second vice chairman of NPP UK provided counselling , Mr Lord Mcmensah provided initial support for setting up the chapter whilst Dr Da Costa Aboagye on his part shaped the strength of the chapter foundations.

In conclusion of his speech, the Chairman Mr Appiah - Kubi communicated the decision of the West London membership and executives by honouring Dr Da Costa Aboagye as a life -time patron for the chapter in recognition of his sacrifices and commitment to the establishment of West London Chapter as a full chapter.

There were donations from existing, chapter- in -formations and some individuals to support the new chapter.

I dare confused, boastful Shatta Wale for a battle at stadiu...
47 minutes ago