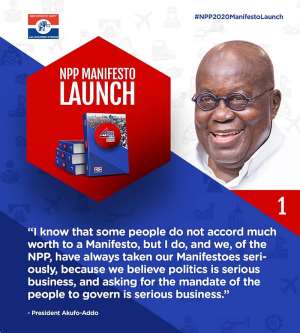 Address By The President Of The Republic, Nana Addo Dankwa Akufo-Addo, At The Launch Of The 2020 Manifesto Of The New Patriotic Party, On Saturday, 22nd August 2020, In Cape Coast, Central Region

It is a joy to be in this celebrated, ancient city of Cape Coast, the capital of the Central Region and appropriately named for generations as the ‘Athens of Africa’, to undertake our activity of today – launching of the NPP 2020 Manifesto. We are doing so in a region that gave us a massive endorsement in 2016, for which we continue to be grateful, and whose mandate we have done everything to fulfil.

We are honoured by the attendance of no less a personage than the traditional landlord, Osabarima Kwesi Atta II, Oguaamanhene, who has chosen to grace the occasion with his presence. Osabarima, thank you for being here. Yɛda wo ase.

Four years ago, on 9th October 2016, the New Patriotic Party (NPP) presented to the Ghanaian people a Manifesto that spelt out a programme of what we would do in office, when entrusted with power at the elections. We called it CHANGE: AN AGENDA FOR JOBS, Creating Prosperity, Securing the Peace.

We had spent a lot of time, and consulted widely, and were guided by the core values of our party in prioritising the solutions to the many problems that faced our country.

I said, at the launch, that a Manifesto represented, for me, a solemn social contract between the electorate and the elected. I had entered into the contract by signing the document on my behalf and that of the NPP. By voting for us on 7th December 2016, the Ghanaian people had also signed their part of the contract, giving us the mandate to implement the ideas in the Manifesto. I said I fully understood the consequence of putting my signature to a contract.

I know that some people do not accord much worth to a Manifesto, but I do, and we, of the NPP, have always taken our Manifestoes seriously, because we believe politics is serious business, and asking for the mandate of the people to govern is serious business.

We believe that citizens must be treated with respect. Once given the mandate to govern, we are bound by the promises that we make to the good people of Ghana, and we set about translating the promises into concrete programmes.

I said, when we were asking for the mandate to govern, that I want a Ghana where government is accountable to the electorate, not with artist impressions of projects and green books, but with cold facts and figures.

Fellow Ghanaians, you would have noticed, therefore, that all the presentations that have been made today have gone into great detail in providing a clear accounting for what we have done in the three years and eight months we have been in office. I want to thank all the men and women who made these solid presentations.

I take pride especially in two things that have characterised the implementation of our programmes: we have succeeded at equitable distribution, which means all parts of the country have been touched by our policies, and we have delivered value for money.

I take pride in the fact that free SHS and free TVET have been delivered, and our young people, and their parents and guardians, know that they will no longer be forced to stop school at JHS level because of financial difficulties.

It was not easily done, and, so, we intend to protect it, and prevent any so-called ‘review’, another word for cancellation.

We have no reason to believe the NDC presidential candidate’s newly proclaimed conversion to free SHS and free TVET. For eight years, he and his party were loud in their assertions that they did not believe in free SHS and free TVET, they did not like the idea, they rubbished it at every opportunity, and they proclaimed that it would destroy Ghana’s educational system.

When they were in office, they had a hard time trying to run even their watered-down version of their so-called progressively free education. Then the former President said he would “review” it, and now we hear him say it has come to stay.

Excellency, please try another one. Your credibility on this one is zero, free SHS, free TVET cannot be trusted in your hands.

In much the same way, we would not risk putting agriculture under the NDC and its leader; they will once again leave the farmers on their own, without the support that is helping to make farming the profitable and fulfilling business it should be.

And why would anyone imagine that an NDC administration, under the former President, would treat businesses any differently from what they did the last time around?

Fellow Ghanaians, in spite of the unexpected and dramatic entry into our lives by COVID-19, and the subsequent worldwide devastation, we can demonstrate that we have set the economy on a strong foundation, and businesses will flourish. The virus has slowed us down, but it has not diverted us from the path of growth we have put the country on.

It is interesting to note that the NDC in opposition is not able to take the lead in doing some of the things that are most often done first by parties in opposition. You might remember how long it took the NDC presidential candidate to find a running mate, and they have not yet got a Manifesto. I wonder what will happen the day they have a government to run as well. Or, maybe, it is simply showing the country they do not attach much importance to a Manifesto, nor should we expect that whatever is written in it would reflect their beliefs. Which presupposes, of course, that they now have or hold on to any firm beliefs, instead of bending in the direction of whatever they think is currently fashionable. We wish them luck with their Manifesto, whenever they are done with it.

In other words, it helps to believe in something, to spend time and energy to think it through, and to get passionate and competent people to lead in the implementation of the programme.

On the day of my acclamation as the presidential candidate of our party, for which I continue to express my deep gratitude to Almighty God and to the myriad of officials and the faithful supporters of our great party, I said that there was a clear choice before our nation, as the two main candidates could be adjudged on similar basis. The people of Ghana could decide who among the two had made a better job of governing our country as president.

I know that the NDC presidential candidate, His Excellency John Dramani Mahama, believes and says often that Ghanaians have a short memory. And he must hold strongly to this belief, otherwise, I doubt he would have summoned the courage to be seeking another term after the disaster that was his presidency.

I have heard him make the extraordinary claim that Ghana’s economy was in “tatters” not because of the COVID-19 pandemic, but because of mismanagement. I doubt that he can recognise a well-managed economy, even if it slapped him in the face.

Luckily for us, we do not have to rely on his judgement or assessment of the economy. But it is important to tell him, just in case there are others like him around that Ghana is, today, in a position to be able to provide one hot meal for JHS 3 students who are back in school in the midst of a pandemic, to pay for six (6) months the water bills of all Ghanaians, to subsidise the electricity bills of all Ghanaians for three (3) months. Indeed, we thank the Almighty that the pandemic did not strike under his presidency, when there was no money in the national kitty to pay teachers and nurses allowances.

We are very much aware of the realities of the times. We know the havoc that COVID-19 has wreaked on our economies and livelihoods. I have asked our party members to keep these sensibilities in their minds in all they do, as they go about campaigning for votes.

Adherence to the COVID protocols means we cannot resort to the traditional methods of campaigning, and I urge all of us to obey strictly these rules. We cannot have the traditional crowds and rallies, and wherever there are gatherings, we have to try to observe the social distancing rules.

It has been said by the NDC presidential candidate that NPP policies lack sense.

If running an emerging oil economy into the arms of the IMF, because of indiscipline in the management of the public finances, is sense, I am happy that the NPP has another concept of sense.

If having sense means cancelling teacher trainee and nurses allowances is sense, I am happy that the NPP has another concept of sense.

If having sense means recording the worst economic management statistics of modern times, with the lowest rate of growth of the last thirty (30) years, I am happy the NPP has another concept of sense.

Having sense in the NPP means being able to take an economy growing at 3.4% to an economy that grew, on the average, for three (3) successive years, at 7% per year, before the pandemic, and was rightly acknowledged as one of the best performing economies not just in Africa, but also in the world.

Having sense in the NPP means executing the Programme for Planting for Food and Jobs, which has led to the revival of Ghanaian agriculture from the doldrums of the NDC years, bringing in its wake bumper harvests and affordable food prices in our markets, and exports of significant quantities of food stuffs to our neighbours.

Having sense in the NPP means implementing policies which, according to the latest Ghana Living Standards Survey, has resulted in a decline in unemployment rates from 11.9% in 2015 to 7.3% in 2019.

I am happy with and prefer the NPP’s sense.

Let me use this occasion to assure the Ghanaian people that, as President of the Republic, I will do everything within my means to ensure the peace and stability of our country in the run-up to, during and after the polls of 7th December 2020. The struggle of our forebears in the Danquah-Dombo-Busia political tradition, to construct, at great sacrifice, a democratic, open, free system of government in Ghana, will not be jeopardised by me, and I am calling on all actors in the political space to join me to ensure the maintenance of the peace and stability of our country, and to conduct ourselves in a manner devoid of violence and ethnocentrism. The Ghana Project can best be achieved in unity, tolerance and mutual respect.

Fellow Ghanaians, the NPP has, in 2020, one target and one objective only, that is to secure, with your support and the blessing of the Almighty, in free, fair, peaceful and transparent elections, another decisive victory on 7th December 2020 – a victory that will give us a clear majority in Parliament and a first round presidential victory, and enable us to do four more years of advancing the peace, progress and prosperity of our nation for you.

We have an excellent message, as set out in our Manifesto, LEADERSHIP OF SERVICE: PROTECTING OUR PROGRESS, TRANSFORMING GHANA FOR ALL, and as eloquently articulated by that brilliant Ghanaian, Mahamudu Bawumia, my most esteemed Running Mate and Vice President, which will protect our progress and continue down the path of social and economic transformation, on which all Ghanaians are now embarked.

It is four more years for Nana and the NPP to do more for you.

May God bless the New Patriotic Party, and us all, and may God bless our homeland Ghana, and make her great and strong.

I thank you for your attention.