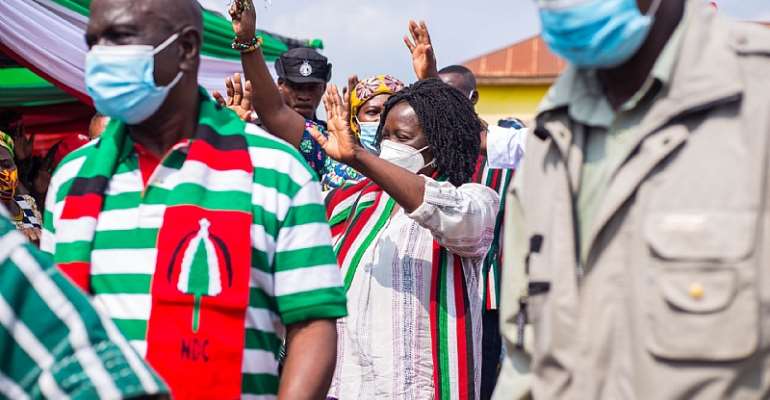 The Paramount Chief of Chiraa Traditional Area, Barima Mintah Afari II, has endorsed the Vice Presidential candidature of Professor Jane Naana Opoku-Agyemang, saying it is time for an intelligent and hardworking woman to be at the Presidency.

According to him, the selection of Prof. Opoku-Agyemang as running mate to President John Mahama of the National Democratic Congress (NDC) for the December presidential election, is in line with the meaningful progression of women in the governance of the country.

The traditional leader cited the exploits of Yaa Asantewaa, who exemplifies the courage of women, adding that apart from having females in Parliament, the country has had a female Speaker of Parliament (Joyce Bamford-Addo) and two female Chief Justices (Georgina Theodora Wood and Sophia Akuffo).

The accomplishments of these women, he noted, meant the timing was right for a female to be vice president or president of Ghana.

The Chiraahene gave the endorsement when Prof. Opoku-Agyemang paid a courtesy call on him on Thursday at the start of her campaign tour of the Bono region.

“Today, we are confident you can lead the way, in partnership with John Mahama, for the meaningful development of Ghana,” he emphasized.

Judging from her achievements, the chief expressed optimism that Prof Opoku-Agyemang, as a vice president, would offer enormous benefits to the nation through the various well-meaning development policies the NDC intends to pursue in government.

He prayed for victory for her and the NDC, and called for an issued-based campaign, adding that insults do not win votes.

Prof. Opoku-Agyemang thanked the Chiraahene for the support and urged the people of the region to vote massively for the NDC in the upcoming elections.

The running mate gave the assurance that the next NDC government would fix all the difficulties created by the present government's haphazard policies, and implement projects and programmes to enhance the lot of Ghanaians.

Prof. Opoku-Agyemang was accompanied by Mr Johnson Asiedu-Nketia, General Secretary of the NDC, Mr Alex Segbefia, a former Minister for Health and Deputy Campaign Manager of the party for the 2020 elections, Ms Emelia Arthur, a former Deputy Western Regional Minister, Hon. Samuel Okudzeto Ablakwa, Member of Parliament for North Tongu and Mrs Mawuena Trebarh, Spokesperson and Head of Communications for the running mate.