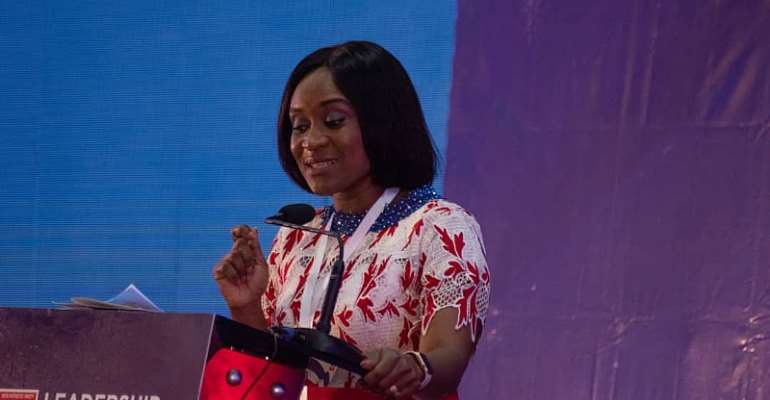 According to her, it is a smart economic investment the government has made since it came into power.

“Three years on, 1.2 million future leaders have been secured with Free SHS. Recently, I heard Mr. Mahama advising that we should stop talking about social investments and discuss real investments. Free SHS is the smart economic investment and we need four more years to do more,” she said at the official launch of the NPP manifesto at Cape Coast in the Central Region today, Saturday, August 22, 2020.

Abena Asare, who doubles as the Member of Parliament (MP) for Atiwa East, further applauded the government for providing jobs for 100,000 unemployed graduates.

She stated that “Under the tenure of Mr. Mahama, the dignity and self-respect of our youth had been so undermined by incompetent leadership that some graduates formed the Unemployment Graduates Association. Through NABCo, we have created the opportunity for 100,000 graduates, to prepare them now for the future to make them resourceful to make value for themselves and wealth for Ghana.”

The Free SHS program has become a controversial subject in Ghana’s political discussions with some members of the NPP accusing John Mahama of hypocrisy in claiming that the idea is laudable and was initiated by his administration.

The former President, on Saturday, August 2020, during a visit to the Overlord of Dagbon, Yaa-Naa Abukari II debunked claims that he will abolish the Free SHS programme being implemented by the governing NPP if he comes to power.

“Free Senior High School education has come to stay. If anybody tells you that I, John Dramani Mahama, son of E.A Mahama will abolish Free SHS when I come, tell the person he is a bloody liar. What I am against is the poor implementation of the Free SHS which is creating great inconvenience for the parents, for the students and for the teachers and the point I have made is that we can make it better.”

“If this government had followed our plan of continuing with the 200 new Senior High Schools that we were building, we will not have the current situation that we have in our Free SHS plan,” said John Mahama.

But members of the governing NPP have taken him on, accusing him of only making such statements to win the votes of Ghanaians come December.

Latest Photo Reports
Catch up with all the political quotes from our politicians.
Advertise here
More NPP News
ModernGhana Links
"It was fantastic experience to serve under President Nana-Addo" - Outgoing Techiman MCE
Government’s integrated aluminum development corporation will drive industrial development – NPP Germany
Akan NPP introduces DCE nominee to chiefs
You will soon be recognised - NPP's Armstrong assures failed MMDCEs aspirants
Though Akufo-Addo will not be on the ballot in 2024, punish him by voting NPP out for enhancing his insensitive, reckless leadership — Apaak
The new GBA president can't criticise government, he's a known NPP member — Yamin
My loyalty to Akufo-Addo, NPP is intact; count on me — Outgoing Tuobodom DCE
'Am grateful to Akufo-Addo for my nomination' — Hannah Asamoah
North East NPP condemns Chereponi disturbance
TOP STORIES