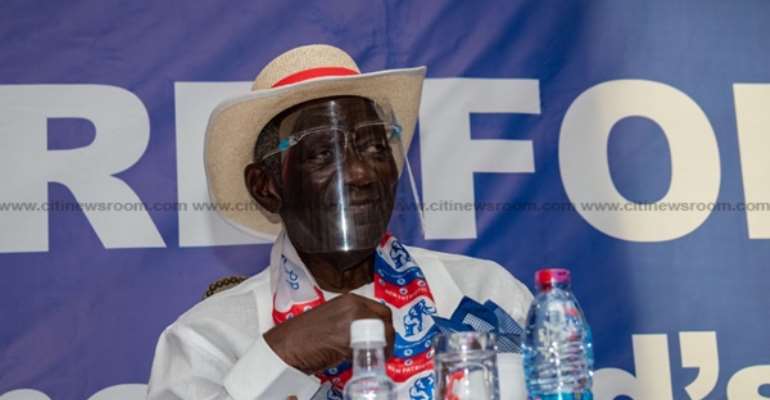 Ex-President, John Agyekum Kufuor believes the New Patriotic Party (NPP) is unmatched in terms of socio-economic development in the country.

He says President Nana Akufo-Addo and his Vice, Dr Mahamudu Bawumia have in their first term in office ‘done wonders’ in governing the country.

Citing key policy initiatives such as the Planting for Food and Jobs and the country’s response to the COVID-19 pandemic, the NPP stalwart said Ghanaians will see the progress they so desire if they only vote again for the NPP during the December 7, 2020 polls.

“There is no alternative to the NPP government that has discharged its work so well…Akufo-Addo and Bawumia over the last three years have done wonders. See how they have managed the COVID-19 situation, see how planting for food and jobs is performing. They need another four years to continue the development of the country”, Kufuor said in a video during the launch of the party’s manifesto in Cape Coast today, August 22, 2020.

Ex-President Kufuor has always touted the credentials of the NPP, asking the Ghanaian electorate to sustainably renew the mandate of the party because it holds the key to the country’s advancement.

At the acclamation of Nana Akufo-Addo as the party's presidential candidate for the 2020 polls, he said the NPP is endowed with transformational leaders who are committed to putting the country's interest far above that of the party.

“This leadership doesn't just talk, it does the work. This is why Ghana must just give the NPP another term. I always say that our party is destined to lead in the transformation of the country and the party always gives the leadership that will do the work for the people of Ghana. Nana Akufo-Addo and Bawumia will continue and the future of the party will be sustained for Ghana inclusively not just for our party -the rule of law, wealth creation, and humanity will all come together and the promises will be clear for anybody who wants to see”, he said.

Meanwhile, National Chairman of the NPP, Freddie Blay has also asked Ghanaians to renew the mandate of the party on December 7, 2020.

He says the party has more to offer Ghanaians and the extension of its mandate will be in the right direction because they have been able to improve the country’s ailing economy in less than four years.

To him, giving the NPP another four years in office will be a positive move in further safeguarding the future on Ghana.

“Within the three and a half years, we have kept our faith with the people of Ghana to a very great extent. We have fulfilled our promises largely and this is evident all over the country, and it could be seen in the extent that the economy has been repaired in spite of its mercy state we found it.”

Government to reclaim mined-out areas in Ghana
42 minutes ago