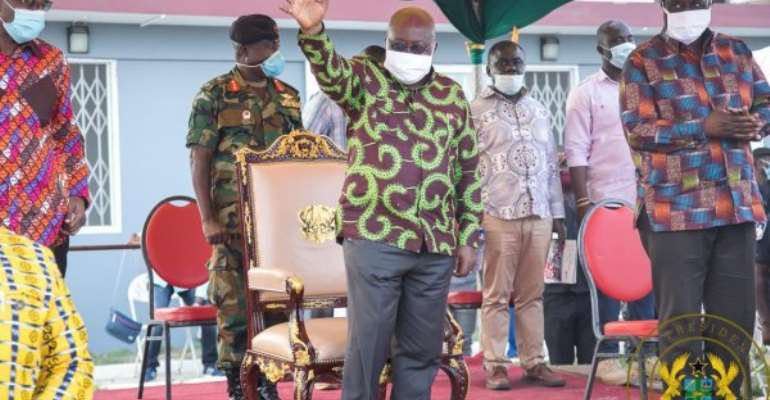 President Akufo-Addo has expressed government's commitment to ensuring national peace and harmony before, during and after the December 7 polls.

He said government was keen on delivering its promises to have its mandate renewed by Ghanaians therefore, it will not trade national peace, harmony and development for any personal gain.

Addressing the Chief and people of Ekumfi-Nanaben prior to the commissioning of the Ekumfi Fruits and Juices Company Limited, President Akufo-Addo said "I'm making a formal commitment to the Nation, the safest pledge I can undertake is that the December 7 election in Ghana is going to be conducted in peace."

He reiterated that election was an opportunity for people to in freedom, devoid of intimidation and violence make decision about the future management of the country.

"There are some who see this occasion as an opportunity to force people to make a decision one way one the other, I am not one of those who subscribe to that way of thinking and I am determined to make all arrangements possible to guarantee the peace, security and stability of our country before the 2020 general election."

“It is not in my time that the image of our country is going to be disturbed and I want you to have that assurance in full," the President said.

As a testimony to his relentless commitment to peace, President Akufo-Addo pledged to name a fish landing site to be constructed at Ekumfi-Otuam, after the late former President, John Evans Fiifi Atta Mills, who hailed from there.

President Akufo-Addo said the facility will immortalize the name of the former President who he described as his good friend in their University days and a political competitor.

Later, the President commissioned Casa De Ropa factory established at Gomoa Bewadze in the Gomoa West District which processes the Orange Fleshed Sweet Potato into puree, which lend itself into further processing into biscuit, bread and chips, crisp, dough nuts, pies and other pastries.

The orange fleshed sweet potato is locally produced and forms more than 50 per cent of its inputs, in the production of chips, bread and biscuits.

President Akufo-Addo commended the management of the company for turning one of Ghana's stables into a variety of products and reiterated government's commitment to supporting the private sector to grow.

The one district one factory policy, he noted was to diversify the economy and boost local economies to compete globally as they took full advantage of various market interventions including the African Continental Free Trade Areas (ACFTA).

MMDCE appointments shouldn't be seen as job for the boys' - ...
34 minutes ago